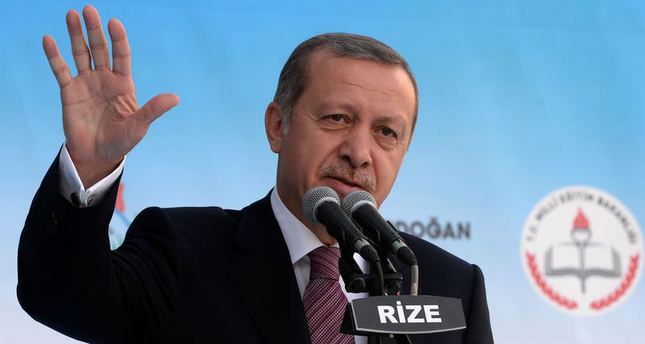 by AA Oct 11, 2014 12:00 am
The protests around Turkey this week seek to wreck the reconciliation process, Turkish President Recep Tayyip Erdoğan said Saturday.

The reconciliation process seeks to put an end to terrorism, and so it is targeted, Erdoğan explained.

Erdogan condemned the violent protests in support of affiliate group of the outlawed Kurdistan Workers' Party, battling with the ISIS at Syrian Kurdish town of Kobani, also known as Ayn al-Arab, just across the Turkish border.

"They are attacking the peace, stability and fraternity in Turkey under the pretext of Kobani. What has Kobani to do with Turkey?" Erdogan asked during a speech made at his hometown Rize in the north of Turkey.

Blaming certain provocative milieux for perpetrating the violent protests, Erdoğan also said: "It is not only the PKK, or the political wing of that terrorist group. The Assad regime in Syria is also behind these events. These two are working together."

Fethullah Gülen, the Pennsylvania-based preacher, is accused of allegedly attempting to overthrow the government. His Gülen movement allegedly has followers embedded in the police and the judiciary.

The Turkish government blames Gülen for the arrest of several high-profile figures, including the sons of three former government ministers and several leading business figures, in an "anti-graft" operation that was allegedly part of a plot to overthrow the government. They were released from prison with all charges dropped on December 17 and 25.

Protests demanding Turkish military intervention in the battle for Kobani raged from Wednesday this week in different parts of the country: 12 in Diyarbakir, six in Mardin, five in Siirt, four in Gaziantep, two in Van along with one in each of the provinces of Batman, Mus, Adana and Istanbul respectively. The protesters claim the Turkish government was doing nothing to halt the advance of ISIS into the town.

"Did not we accommodate our 200,000 Kurdish brothers when they sought refuge here? Turkey took in all of the 200,000, and provided refuge and food for them?" Erdoğan asked.

Turkey launched what is publicly known as the "reconciliation process" to end the decades-old conflict with the outlawed PKK, a dispute which has claimed the lives of more than 40,000 people over more than 30 years.