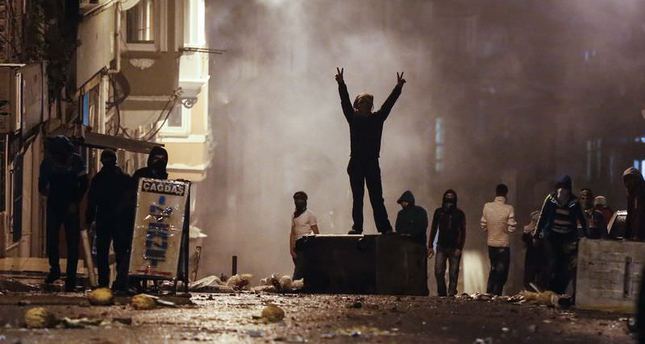 by Daily Sabah Oct 12, 2014 12:00 am
The Turkish government is about to expand the authorities given to police to place tougher punishments for street violence under a new regulation set to be submitted to Parliament on Tuesday, a move that is expected to raise Turkey to European standards regarding security. The recent protests that morphed into riots leaving 34 dead and public property damaged prompted the Turkish government to come up with tougher punishments under new regulations. The new legislation not only expands the powers of the police but also places stricter punishments for offences such as damaging public property and concealing identities by wearing masks during protests.

President Recep Tayyip Erdoğan, during a speech in Trabzon, said police intervention using only shields was insufficient to fight the protestors, and necessary measures would be taken to increase the efficiency of the police with new regulations to be put into force. He also expressed his opinion of masked protestors saying: "What do these masks mean? Take it off unless you are a terrorist."

Protests demanding a Turkish military intervention in the battle for Kobani, a Syrian Kurdish town near the Turkish border, raged this week in different parts of the country and killed 34 people amid bouts of street violence.

Protestors claimed Ankara was doing nothing to halt the advance of the Islamic State of Iraq and al-Sham (ISIS) toward the town of Kobani, which is populated by Syrian Kurds.

Ankara, which is currently seeking permanent measures to prevent unauthorized protests from growing into vandalism, hopes to double the sentences handed down for the offences in question both to deter the public from staging such protests again and to raise the security standards to Western levels.

The new security package will cover changes in two articles of the Turkish Penal Code.

The protestors who are accused of harming public property currently face a sentence of one to eight years in prison and two to four years in jail is sought for those who prevent public officers from carrying out their duties by threatening them. These sentences will increase under the changes that are about to take place.

Last year's Gezi Park protests similarly engendered unrest in the country as they were hardly contained. The protests began as peaceful protests turned into clashes between the police and the protestors. Radical protestors are accused of manipulating the demonstrations in an alleged attempt to overthrow the government. They were detained as a result of the protests and later released pending trial.

If the new regulation takes effect, the suspects that are involved in violent street protests will not be released pending trial and remain under arrest while they stand trial.

"I hope that, after Tuesday, the Turkish Parliament will make new legal arrangements. The government will take administrative measures and other institutions will do their part to clear the streets rapidly from these vandals," Erdoğan said, speaking in the northeastern city of Rize.

Erdoğan said that he awaits the support of all political parties and nongovernmental organizations on this issue by saying, "We will see who will support the government in Parliament and who will not."

Erdoğan asked that citizens put all their disputes and differences aside and "everyone must assume responsibility for the survival of the country and give the necessary support to those concerned."

He continued by saying that nobody could ask him to stay silent and neutral as demonstrators were burning schools, hospitals and nursing homes.

Fifty-seven people were imprisoned Saturday night in the provinces of Diyarbakır, Mardin and Siirt – all located in the southeast of Turkey where the most intense protests have taken place.