Turkey’s ISIS formula: a new power in the region 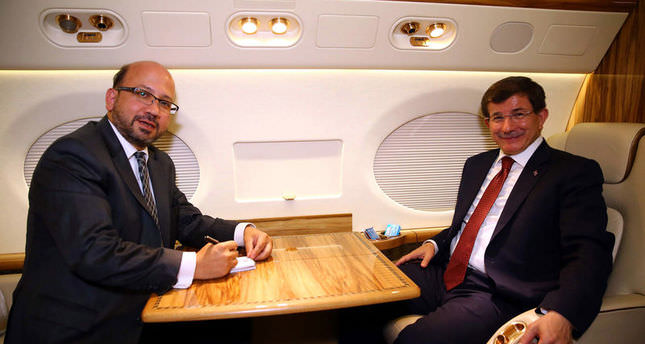 by daily sabah
Oct 12, 2014 12:00 am
Turkey suggests a new strategy for Syria, in which a power consisting of only Syrians --with no foreign fighters-- emerges. According to this strategy, U.S.-led coalition will hit the bases in Syria, while the newly emerged force will structure the country, Turkish Prime Minister Ahmet Davutoğlu told Turkish newspaper Sabah's reporter Okan Müderrisoğlu in an exclusive interview on Saturday.

"The new power should consist of only Syrians from all fractions of the country, as is the case for Syrian National Coalition," Davutoğlu said.

Davutoğlu also gave Turkish government's opinions about the other two ways for peace to restore in Syria. The first way is for international community to deploy army ground forces in the region, Davutoğlu said, pointing out that Turkey will not by itself enter Syria. In case of a national security threat or an attack on the Tomb of Süleyman Şah, however, Turkey will not be hesitant to take all kinds of measures, Davutoğlu stated.

The second way is to hit Syria with airstrikes, but such a strategy is not effective, according to the Turkish Prime Minister.

There is a need for an integrated political-military strategy in the region, according to the Turkish Prime Minister. He called out to the international community, saying, "Let us all establish this strategy."

"If there is an integrated strategy, we will also contribute to the solution," Davutoğlu said. "We cannot just sit and watch the process."

Davutoğlu also criticized the pro-Kurdish Party HDP's calling for street demonstrations against the terrorist group ISIS and Turkey's stance on Kobani, which led to riots all over the country, resulting in 33 people's death.

Davutoğlu said, "Either a group inside this party (HDP) is disturbed by the ongoing Kurdish reconciliation process or Turkey is trying to be blackmailed."

"My suspicions about HDP's sincerity (about reconciliation process) have increased."

Davutoğlu also answered the Sabah reporter's questions on the soon-to-be enacted law which will regulate freedom. In response to the reporter's question that AK Party is being criticized by some people for curbing freedom in Turkey, Davutoğlu said, "We are not bringing restrictions on freedom. We will restrict those who disregard human and property rights using violence."

"Someone who does not take a gun and go outside should not think of this law as curbing his or her freedom."