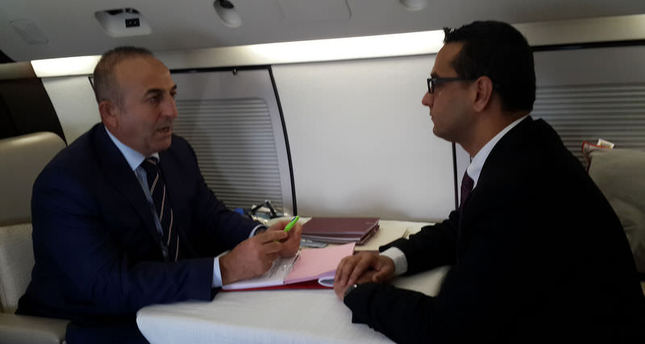 In an exclusive interview with Daily Sabah, FM Çavuşoğlu said that Turkey will only engage in a land operation against ISIS with the anti-ISIS coalition’s support and called for a comprehensive action plan to cleanse the region of terror

While Turkish foreign policy faces possibly the most intense days in its history, Mevlüt Çavuşoğlu, the former minister of EU affairs, was appointed as the minister of foreign affairs with the new government formed at the end of August. Daily Sabah spoke with Çavuşoğlu on various topics ranging from Turkey's U.N. Security Council temporary membership candidacy to developments in Ukraine and Cyprus.

What is the disposition of Turkey regarding a land operation against the Islamic State of Iraq and al-Sham [ISIS]?

Airstrikes against ISIS in Syria and Iraq were launched, however, it was seen that airstrikes by themselves are not very effective. There are expectations of a land operation from Turkey. We, as Turkey, state that a detailed action plan and strategy should be defined for this fight. The aim should be specified clearly. Are we going to halt ISIS or provide stability and security to the region? We assert that the lack of authority due to the instable administrations in the region pave the way for ISIS's emergence and therefore a plan against ISIS should be a comprehensive one. Taking precaution against only one threat is not a realistic approach – the region should be eliminated from all threats and be provided with stability. The formulation of this is possible by changing the regimes, cleansing the region from terror and other causes of instability and consolidating democratic and state institutions.

This is our disposition and we will not engage in a land operation without the coalition's support. As every country does, we have to take our soldiers' security into consideration. Without a comprehensive strategy, it is wrong to expect Turkey to engage all by itself.

As a politician who is awarded with orders by both Russia and Ukraine, what is the role of Turkey in the resolution of the crisis in Ukraine?

The reason of being awarded with these merits by Ukraine, Russia and other Eastern European countries is due to the work that was done while I was the head of the Parliamentary Assembly of the Council of Europe. We treated all countries equally. These countries have problems in their relations with the Council of Europe; however, our approach was more constructive than those of Western European politicians.

Turkey's position in the Ukrainian crisis is clear – we do not approve of the annexation of Crimea and we state that it was illegal. We have told Russian officials that we support the territorial integrity of Ukraine. We have acted as an intermediary to provide a solution to the issues between Russia and Ukraine. Our president has talked continually with both of the presidents [of Ukraine and Russia]. When we look at the West's relation with Russia we can observe different approaches. We also see that these approaches fail. Everybody has made mistakes on this issue. I see the dilemma forced by Europe and Russia on Ukraine as a misfortunate event. There should be more sensitivity due to demographic, cultural and historical reasons.

What is important now is ensuring a cease-fire and making it permanent. After this, it is important to have a dialogue and solve the issue, however, this does not seem to be possible in the short term. On the other hand, Crimean Tatars and their democratic, political and economic rights are prominent for us. I should say Russia's attitude toward this subject is not a positive one. They have banned Mustafa Kırımoğlu and many other important figures from entering Crimea. I have conveyed our concerns to [Minister of Foreign Affairs Sergey] Lavrov, my Russian counterpart. We are working to provide a solution to the issue.

Last week, Greek Cyprus resigned from the peace negotiations. How will the process continue? Will the negotiations start again? If not, can the integration of Turkish Cyprus with Turkey come to the fore?

We are seeing these negotiations as an opportunity to achieve a permanent solution and support it. However, we do not want this process to be prolonged in ambiguity. I cannot give a concrete alternative to the current situation, although we will think of alternatives as the situation continues to develop.

As a person who knows Greek Cyprus's policies well, I was hopeful of [President Nicos] Anastasiadis' government showing the courage to make steps for a permanent solution. I knew that the people of Greek Cyprus were also more willing for the solution but the current situation is far from the desired point.

If there is not going to be a solution negotiated between the two states, every state will take care of itself. It is not right to make a conclusive statement at the moment however, it is clear that this status quo will not prevail.

We desire for a solution and the peaceful coexistence of the people, but it can be seen that the Greek Cyprus administration is insincere in its approach to negotiations. They resigned by using the natural gas survey as an excuse. It is the right of both of the states to survey for natural gas in the boundaries of the continental shelf.

We have made the call for the continuation of peace negotiations again. The U.N. should play an active role in this process. In my meeting with [U.N. Secretary General] Ban Ki-moon I told him that he should be directly involved in this process. Greece should also take an active role in it. However, if this subject continues to be seen as a domestic political material for both Greek Cyprus and Greece, making progress will be challenging.

One and a half months ago you were the minister of EU affairs, you have contributed to the 2014 Progress Report process and observed it closely. How do you evaluate this report?

We do not expect these reports to be full of compliments, but the critiques should be realistic and constructive. We have discussed many critiques with them, and to some extent, our concerns were understood, however, there still are some unrealistic critiques in the report.

I had been in effective communication with the EU during my time as the minister of EU affairs. Now, Volkan Bozkır continues these communications because it is important to have mutual understanding. Again, I think that the report should include more evaluations that are result-based and regard negotiations.

On the other hand, we observe that the EU does not criticize itself. In my opinion, they should criticize themselves in subjects such as expansion, neighborhood and foreign policy. In the 2011 report they criticized themselves for not opening chapters due to their indecision. Negotiations should be focused on chapters and result-based. There are critiques about the jurisdiction; however, they are not taking steps for the opening of related chapters. They don't even inform Turkey about the conditions upon which chapters are opened. Despite all of these we have unofficially fulfilled the conditions of six chapters.

The U.N. Security Council's temporary membership elections will be held this week and Turkey is one of the candidates. Why did Turkey declare its candidacy and what are you doing for this?

Turkey's membership in the U.N. Security Council will create a synergy with the actions we are taking and will take. Also, our membership is for the benefit of regions that have expectations of Turkey. Turkey is effective in vocalizing the issues of less developed countries. In 2015 we will assume the presidency of the G20 and will hold a humanitarian forum for the first time. With our humane foreign policy we are in a reputable position in the eyes of Asian, African and South American countries. We are working on important activities in the U.N. We had held a least developed countries summit and we will continue it. We have many joint ventures in the U.N.: diplomatic conciliation with Finland, counter-terrorism with the US and civilization assembly with Spain. On the other hand, we want to transform Istanbul into a U.N. headquarters. All of these indicate that Turkey should be more active in the U.N.

Despite the fact that we declared our candidacy late and started our campaign later, we are doing a great job. We mentioned our candidacy in every platform possible and sought support. We are hoping that the result will be satisfying. In the last U.N. General Assembly meeting in New York, we saw that there is a tremendous support for Turkey. God willing, we will be elected again.

As one of the founding members of the Justice and Development Party [AK Party], you have been actively in politics for 13 years. Regarding foreign policy, you have observed crises and worked in different fields. How do you define the problems faced by Turkish foreign policy? Is it a crisis, turbulence or a transformation?

I do not think that Turkish foreign policy is either in a crisis or turbulence. Turkey is one of the most reputable countries when speaking of relations with Africa and South America. It is the same when talking about Caribbean, Asian, Caucasian and Turkic countries. Our relations with Japan are in a golden age. We will crown 2015 with our relations with Australia. We are having the best term of relations with France in the last 20 years and we are in a period in which we have a more intimate relation with Italy. There are many examples such as these, but to summarize, when you look at Turkish foreign policy, you will see that it is successful.

Shadowing this success are the developments occurring in Syria, Iraq, Egypt, Libya and Iran. The events in these countries are not, in any way, originating from Turkey. The global political system has not been stabilized since the end of the Cold War and the tremors from the Arab Spring are still continuing. Turkey could stay indifferent to these developments, although we employ and support a humanitarian foreign policy.

We are having crises in our region in which Turkey is not the cause, but still is trying to dismantle it. These crises, of course, affect us in some ways, however, it also shows that Turkish foreign policy is on the right path.

How do you evaluate the recently increasing criticism that Turkish foreign policy is becoming isolated and Turkey is following a sectarian policy?

Sectarian politics is extremely dangerous and we have always been against it. Saying that Turkey, which advocated the establishment of inclusive governments to provide stability in Iraq and Syria, is following a sectarian policy is a farce.

On the other hand, we are observing a smear campaign against Turkey. One of these was the issue of foreign warriors. News was published that claimed that Turkey was permitting foreign warriors to cross its borders, but when we presented the facts with numbers, they backtracked. Don't you think that newspapers with different political views in the same country having the same headline and writing style regarding Turkey seem a bit suspicious? Or think about a newspaper publishing news internationally that was disclaimed by the original source. Do you think this is acceptable? This news is the result of bad intentions.