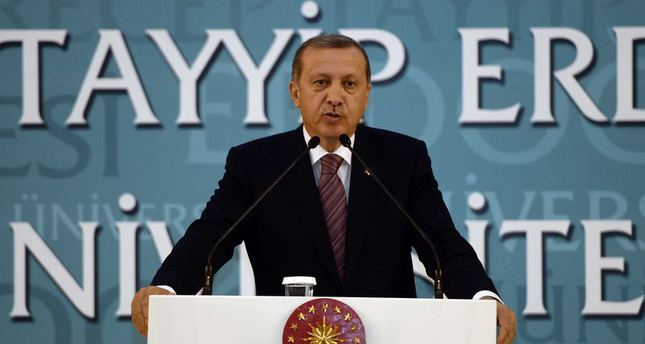 by AA Oct 12, 2014 12:00 am
Turkish President Recep Tayyip Erdoğan said on Saturday that the parliament will make legal arrangements next week to bring an end to the vandalism and violence in the country's streets, which has left 33 dead.

"I hope that, after Tuesday, the Turkish parliament will make new legal arrangements. The government will take administrative measures and other institutions will do their part to clear the streets rapidly from these vandals," Erdoğan said, speaking from the northeast city of Rize.

The president said that he awaits the support of all political parties and non-governmental organizations on this issue by saying, "we will see who will support the government in parliament and who will not."

Erdoğan asked that citizens put all their disputes and differences aside and that "everyone must assume responsibility for the survival of the country and give the necessary support to those concerned."

He continued by saying that nobody could ask him to stay silent and neutral as demonstrators were burning schools, hospitals and nursing homes.

Protests demanding a Turkish military intervention in the battle for Kobani, a Syrian town near the Turkish border, raged this week in different parts of the country and killed 33 people amidst bouts of street violence.

The protesters claim the Turkish government is doing nothing to halt the advance of ISIS towards the town of Kobani, which is populated by Syrian Kurds.

Turkey launched what is publicly known as the "reconciliation process" to end the decades-old conflict with the outlawed PKK, a dispute which has claimed the lives of more than 40,000 people over the past 30 years.

57 people were imprisoned on Saturday night in the provinces of Diyarbakir, Mardin and Siirt - all located in the southeast of Turkey, where the most intense protesting has taken place.

Meanwhile, life in the provinces that witnessed street violence is returning to normal.