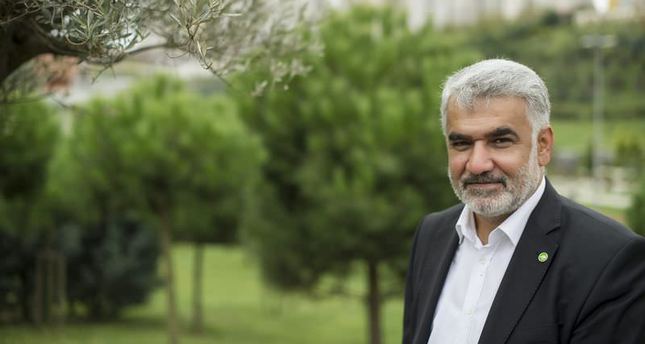 by Daily Sabah Oct 13, 2014 12:00 am
Chairman of the Free Cause Party (HÜDA PAR) Zekeriya Yapıcıoğlu has recently stated that the pro-Kurdish People's Democratic Party (HDP)has lost the support of the Kurdish people who no longer support street protests while claiming most of the violent protestors were brought from different regions as the locals no longer believe in using violent means to overcome problems.

"HDP is not the only representative of the Kurdish people in Turkey" Yapıcıoğlu expressed, stating that the recent protests which took place last week where 34 people had lost their lives and curfew was imposed in six provinces showed that the Kurdish people were against using such means. He noted that many people who voted for BDP -HDP's former counterpart- in the local elections were disappointed as local shopkeepers were brutally attacked and their stores were looted, creating serious resentment amongst the public following HDP's leader Selahattin Demirtaş's call for Kurdish people to take it to the streets for the Syrian Kurdish town of Kobani which is currently under ISIS siege. Yapıcıoğlu highlighted that some people were targeted by PKK supporters based on the outer appearance of their family members, wrongly claiming that they support ISIS. Similarly, he expressed that the protests have not benefited Kobani in any manner.

Yapıcıoğlu harshly criticized Demirtaş's remarks when he said "Ankara will fall if Kobani falls" and claimed he provoked people to take violent action. Likewise, he responded to allegations about his party being responsible for the attacks in Kobani and refuted the claims while noting that Kobani is strategically important for PKK as it provides connection and communication with two other cantons in the region where PKK is active. Yapıcıoğlu explained that HÜDA PAR is against ISIS as the latter is strictly sectarian, racist and indiscriminately labels people as disbelievers, all of which are against the Islamic ideals which emphasize unity and tolerance amongst different people. He stated that the PKK wanted to exploit anti-ISIS sentiments and wrongly claimed that HÜDA PAR supported ISIS. "We are against all types of extremism" said Yapıcıoğlu, who stated that his party is against all methods and ideologies used by ISIS.

Touching upon the notion of establishing an independent Kurdish state, Yapıcıoğlu stated that HÜDA PAR is against such idea as they do not think further division in the region will benefit anyone. "The current borders were artificially drawn by imperial powers following World War I and these borders separated families, brothers and sisters" said Yapıcıoğlu, who claimed that a majority of the Kurdish people share the same views as he expressed Islam is the defining identity for many people. Likewise, he expressed that Islam is a religion of peace and opposes the use of violence while noting that HÜDA PAR will not let provocateurs intimidate them.

According to reports, a total of 34 people died in the recent protests between pro-PKK and anti-PKK demonstrators last week. Only one of the protesters died as a result of clashes with police while others were killed during clashes between pro and anti-PKK Kurdish groups.