US seeks İncirlik air base, Turkey insists on conditions 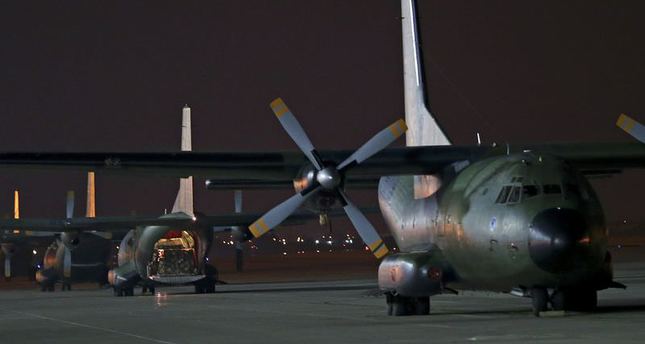 by daily sabah
Oct 13, 2014 12:00 am
As Ankara and anti-ISIS coalition officials hold talks on an action plan against ISIS, the U.S. has pushed its demands to access the İncirlik base, but Ankara has listed its demands of a no-fly zone and safe zone to let the coalition use Turkish bases.

According to the Turkish government, the establishment of a no-fly zone is a must to halt attacks by the regime of Syrian President Bashar Assad on Syrian opposition forces that Ankara and Washington agreed to train and equip in addition to a safe zone along the Turkey-Syrian border for refugees fleeing ISIS attacks in Syria.

Turkey has repeatedly said the fight against ISIS requires a comprehensive strategy and it has demanded the removal of the Assad regime in Syria which, according to Ankara, is part of a comprehensive solution needed to defeat ISIS.

During the negotiations, each issue has been discussed separately and the first absolute decision that both sides agreed is to train and equip moderate Syrian fighters. As several Turkish media outlets reported, Turkey and the U.S. also agreed on using Turkish air space for logistical purposes. Reportedly, while Ankara introduced the demand of "train and equip," Washington demanded to use Turkish airspace.

As part of the talks, a joint U.S. Central Command-European Command planning team is scheduled to arrive in Turkey and a definite time schedule for training and equipping Syrian rebel groups is expected to be discussed this week.

The duty of training the Syrian opposition was given to the Turkish National Intelligence Organization (MİT) and 2,000 Syrian fighters, including mostly Turkmens and those having sympathy for Turkey, will be trained. Since there is a possibility that training and equipping may be carried out within Turkish borders, a high security monitoring of moderate Syrian fighters to be trained is scheduled by the MİT to ensure that the fighters will not turn their arms against Turkey in the future.

Mehmet Şahin, vice-chairman associate professor of the Ankara-based Institute of Strategic Thinking, told Anadolu Agency: "Training Syrian opposition within Turkish territories might cause problems, but the training may take place in a safe zone (if it is established in Syria)."

He said Turkey will train the Syrian opposition while the U.S. will equip them.

U.S. Defense Secretary Chuck Hagel said last Thursday that the key military assistance the U.S. sought from Turkey was access to the Turkish air base at ncirlik.

"The U.S. is being insistent on the İncirlik air base – although it has military bases in the Gulf countries - due to the high cost of airstrikes," said Can Acun from the Foundation for Political Economic and Social Research (SETA).

Acun said the high cost that the U.S. pays for air operations will be decreased if Turkey allows it to use the İncirlik air base, as it is located near northern Syria.

The Pentagon has said the U.S. has spent more than $1.1 billion on its military activities in the region so far.

Russia, one of the strongest supporters of the Assad regime, has said any decision on a safe zone in Syria needs to be made by the U.N. Security Council with the approval of the Syrian regime, while Iran has warned the West against military action in Syria.