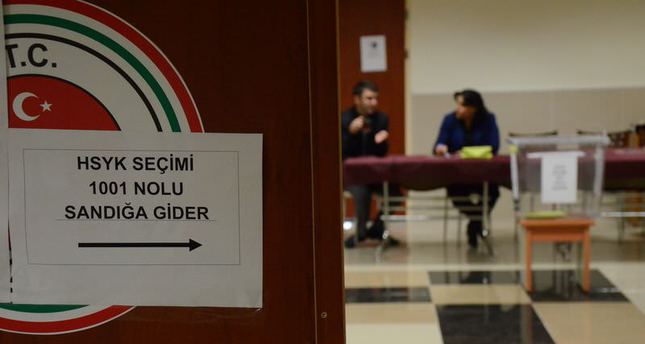 Seen as a crucial test in the fight against the Gülen Movement, judges and prosecutors elect members against the shadowy group for the top judicial watchdog

Gülenist control over Turkey's judiciary became a thing of the past after concerned judges and prosecutors voted against the candidates allegedly affiliated with the Gülen Movement during the Supreme Board of Judges and Prosecutors (HSYK) elections leading to the elimination of the movement's power in the body.

The HSYK is the top administrative body of the judiciary, in charge of supervising the conduct of the members of the judiciary. A total of 13,994 judges and prosecutors went to the ballot boxes on Sunday and curbed Gülenist seats in the judiciary by electing non-Gülenist members in the HSYK elections.The results came as a blow to the Gülen Movement, which is accused of infiltrating key governmental bodies including the judiciary.

The HSYK, which is responsible for the appointment, promotion and removal of personnel within the judiciary, was reshaped following the constitutional referendum on Sept. 12, 2010. The government, which aimed for a more participatory and democratic approach with the amendment, in time, witnessed Gülenists taking control of the judiciary and exploiting this power to carry out anti-government operations.

Gülenists, by concealing their close stance to the movement, allegedly infiltrated the body in the 2010 elections and their intention became apparent over the past year as prosecutors and judges began acting unconstitutionally while giving orders and delivering judgments. The alleged infiltration by the movement was uncovered for the first time in the Feb. 7 operation when Istanbul's specially authorized prosecutors, Sadrettin Sarıkaya and Bilal Bayraktar, who are thought to be followers of the Gülen Movement in the judiciary, issued a summons for National Intelligence Organization (MİT) Chief Hakan Fidan for collaborating with the outlawed PKK organization.

The Dec. 17 and Dec. 25 operations followed the incident. On Dec. 17, 2013, the Financial Crimes and Battle Against Criminal Incomes department of the Istanbul Security Directory detained 47 people, including government officials as well as prominent businessmen as part of an investigation led by a prosecutor allegedly affiliated with the Gülen Movement. Permission to conduct the investigation into government officials to the prosecutor in question was issued by an allegedly Gülenist prosecutor, Zekeriya Öz, with an enactment of the HSYK. Öz was later accused of being partial while carrying out his duty and the HSYK launched an investigation into Öz for losing his objectivity.

"The HSYK stalled for a long time to launch an investigation into Prosecutor Öz, which was proof the body was under the control of Gülenists. They also kept their silence over the incidents that shook the country. It looked as though they were protecting some of the prosecutors," said Reşat Petek, a retired chief public prosecutor.

Petek assessed the results of the elections and said although two members allegedly close to the Gülen Movement will be present in the new HSYK the majority will have a higher voice in the body.

"We can say the parallel dominance in the HSYK has ended and the body will no longer be used as a means to overthrow the government," Petek added.

Mustafa Şentop, Istanbul deputy from the ruling Justice and Development Party (AK Party), who is also a jurist, expressed content over the results saying the judges and prosecutors acted with common sense and elected members with no ties to the movement.

"Changes were made in the Constitution regarding the HSYK having a freer judiciary without a specific group's dominance, but the body was taken over by Gülenists. So now that the threat has been swept away, what we wanted to achieve back then has been accomplished thanks to the jurists who acted with conscience while voting for HSYK members," Şentop said.

"The judges and prosecutors portrayed a significant attitude in the elections. They too were aware of the threat that has been going on for a while," a constitutional law academic, Osman Can, said.

Can underlined that if one of the three branches of government – legislative, executive or judicial – malfunctions in a state, sovereignty faces risk of falling apart.

The results were welcomed by President Recep Tayyip Erdoğan who said the election has proven that justice has won in Turkey during his speech at Marmara University.


Prime Minister Ahmet Davutoğlu also hailed it as the "victory of free will."