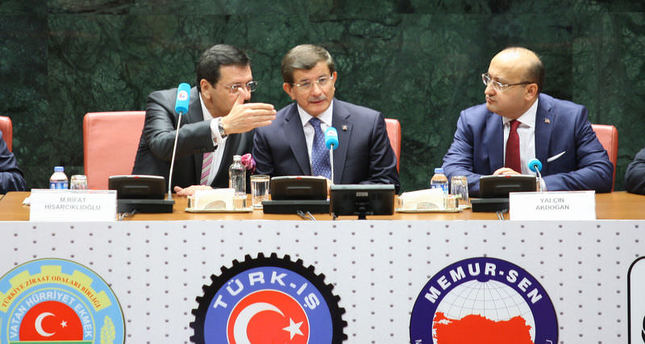 The week-long street violence in the southeast would not deter the government from continuing with the reconciliation process, said Prime Minister Ahmet Davutoğlu yesterday, adding that peace in the country could not be allowed to fall prey to terrorism

Turkish Prime Minister Ahmet Davutoğlu said Monday that the week-long street violence in Turkey was intended to thwart the authority of the Turkish state and the ruling Justice and Development (AK) Party, adding that Turkey would not let the reconciliation process, aiming to solve the decades-long conflict with the PKK, be harmed by terrorism.

"We will certainly never let the solution process fall prey to terror. The best answer to vandalism is our solidarity," the Turkish PM told a consultation meeting of the Turkish Union of Chambers and Commodity Exchanges (TOBB) in Ankara, Turkey's capital. "The intent and aim behind the vandalism was state authority. Shops were also targeted. The third target was the AK Party," he added.

The protesters have used the pretext that the Turkish government has allegedly done nothing to halt the relentless advance of ISIS militants in Kobani, which has become the scene of fierce street battles between Kurdish groups and the militants.

"During this vandalism and the spiral of violence that used Kobani as an excuse, 33 of our citizens have been killed, two policemen have fallen, 135 others have been injured and 531 police cars and 631 civilian vehicles have been set on fire. A total of 122,000 buildings, including 214 schools, Qur'an courses, museums and libraries have been damaged," said the prime minister.

Davutoğlu maintained that the "vandalism" not only sabotaged Turkey's Kurdish resolution process, but also targeted its future and development efforts in the region.

The reconciliation process is a peaceful initiative from the Turkish government to end the decades-long conflict with the outlawed PKK, which has claimed the lives of more than 40,000 people. The PKK is listed as a terrorist organization by Turkey as well as by the U.S. and the EU.

The head of the Turkish government reiterated that they will resolutely pursue the reconciliation process, saying, "No matter what they do, they cannot cripple the public order."

Davutoğlu is also scheduled later in the day to chair a meeting of his Cabinet in Ankara to discuss the protests and violence, its implications and related steps and measures to be taken.