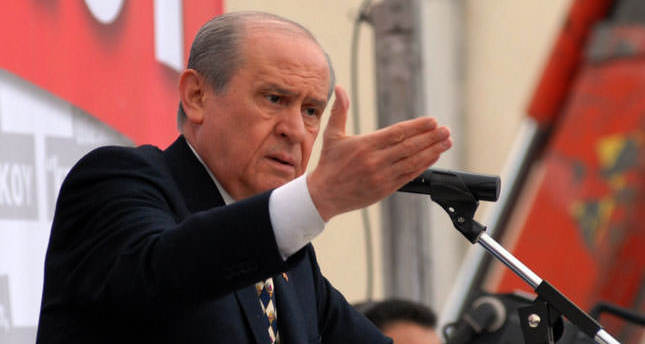 Daring vandals, Bahçeli said "if you feel confident, go and fight against ISIS."

Last week, nationwide Kobani protestors claimed dozens of people's lives and HDP politicians provoked people into protesting across the country. Hundreds of buildings and cars were set ablaze during the fierce demonstrations that later turned into a clash between pro-PKK and anti-PKK Kurdish groups.

During his speech, Bahçeli described the HDP as a "PKK branch" and said that they provoked people into disorder.

The outlawed PKK is a terrrorist organization that took up arms against Turkey in the 1980s with an aim to carve out a separate state in the southeastern region of Turkey.

"The blame of these catastrophic days [of violent protest] is on the HDP, which is a political freak working for the PKK," stormed Bahçeli.

In reference to pro-PKK groups who burned flags during the protests, Bahçeli said that in no period of Turkish history has the country witnessed such treason and hostility.

Bahçeli opposed any corridor and arms aid for Kobani and added that the foremost duty of the government is to guarantee Turkey's own national rights and laws.