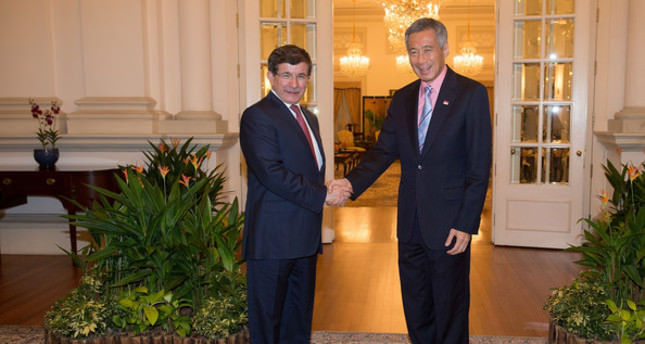 by Daily Sabah Oct 15, 2014 12:00 am
The prime minister of Singapore, Lee Hsien Loong, visited his Turkish counterpart Ahmet Davutoğlu in Ankara on Tuesday and said his country sees the Turkish market as a land of "opportunities."

After holding a meeting behind closed doors the two prime ministers spoke at a press conference where Davutoğlu stressed that as part of the G20 cooperation, Singapore will make positive contributions to bilateral trade. "As countries supporting political stability in their regions, Turkey and Singapore will together firmly walk toward a brighter future," Davutoğlu said.

When asked if chaos in Turkey's neighbors have an impact on investment plans, Lee said despite the regional issues his country is ready to make long-term investments in stable economies. "Singapore sees Turkey as a country of opportunities. Over 20 company representatives have joined my trip to Turkey and they saw the potential here in Turkey. As long as there is stability and investment opportunities we'll continue to work together [with Turkey]," he added.