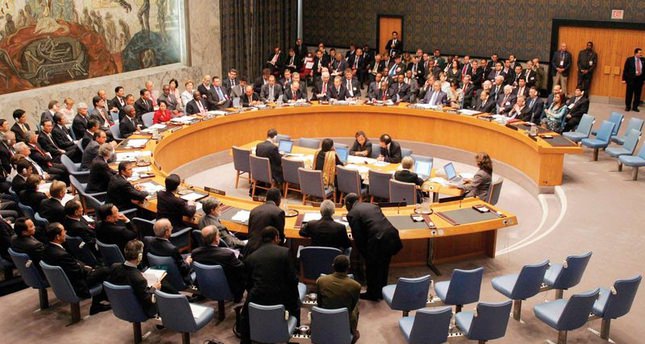 by Daily Sabah Oct 15, 2014 12:00 am
The 2014 U.N. Security Council (UNSC) election for non-permanent membership for the 2015-2016 term will be held on Thursday during the 69th session of the U.N. General Assembly in New York. According to the UNSC's rotation rules whereby the 10 non-permanent UNSC seats rotate among the various regional blocs. Turkey is in a group with New Zealand and Spain vying for two seats and will find out whether it has been successful on Oct. 16.

Minister of Foreign Affairs Mevlüt Çavuşoğlu has been in New York since last weekend to intensify lobbying efforts for Turkish membership. In an exclusive interview with Daily Sabah, Çavuşoğlu said that Turkey's membership on the UNSC will create a synergy with the actions that Turkey takes. "Our membership is for the benefit of regions that have expectations of Turkey. Turkey is effective in vocalizing the issues of less developed countries," Çavuşoğlu said, explaining the reasons behind Turkey's candidacy for the seat.

Even though Turkey declared its candidacy later than other countries and started its campaign later, according to Çavuşoğlu the situation does not pose a problem. "We mentioned our candidacy in every platform possible and sought support. We are hoping that the result will be satisfying. In the last U.N. General Assembly meeting in New York, we saw that there was tremendous support for Turkey. God willing, we will be elected again," he said.

Turkey's UNSC candidacy is also one of the main items of Prime Minister Ahmet Davutoğlu's agenda. Speaking at the Justice and Development Party (AK Party) group meeting on Tuesday, Davutoğlu said that if Turkey re-takes the seat only five years after its previous term, it would be a "historic victory."

"If we are elected, and we believe it's a great possibility, we will be the first country in the world to be elected after only five years. This shows Turkey's importance. We will continue to represent Turkey in every corner of the world as the strongest guarantor of international peace, law and rights," Davutoğlu told AK Party deputies.

Turkey needs to secure at least a two thirds majority of 193 votes, which means around 130 votes are needed for Turkey to be elected. The term will commence on Jan. 1, 2015. Sources in the Foreign Ministry expect around 140 votes. In 2008, Turkey secured 151 votes gaining the UNSC non-permanent seat for the 2009-2010 term.