Turkey’s new EU communication strategy to be announced in Brussels 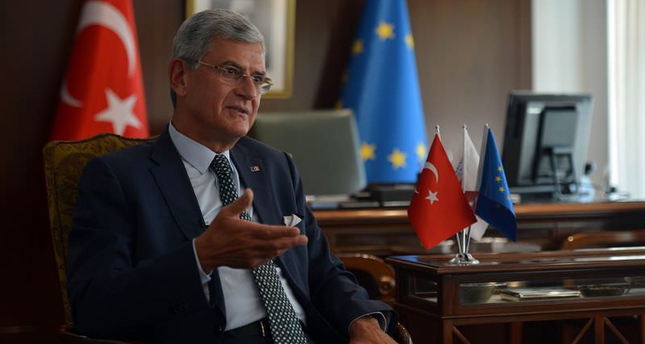 Last month, Bozkır announced that Turkey's New European Union Strategy – the EU negotiation plan that aims to eliminate obstacles to EU membership by accelerating the dynamics of Turkey-EU relations, will be based on three pillars: the political reform process, socio-economic transformation in the accession process and EU communication strategy.

In recent weeks, Bozkır gave a presentation to Cabinet members about the communication strategy, which and the Turkish government later accepted. In an interview with Daily Sabah last week, Bozkır said that that the communication strategy has two principal elements. "These are the EU's perception of Turkey and Turkey's perception of the EU. Regarding this, we will effectively utilize nongovernmental organizations, the business world, universities, unions and such [to facilitate the process]," he said.

During a visit to Brussels, Bozkır will have meetings with the EU Enlargement and Neighbourhood Policy Commissioner, Štefan Füle, the Chairman of the European Parliament Committee on Foreign Affairs, Elmar Brok, the EU's new Turkey reporter, Dutch parliamentarian Kati Piri and other European officials. Bozkır also will address the European Parliament's Foreign Affairs Committee and exchange views and comments with committee members.