CHP leader objects to training and equipping agreement, says US use of Turkish base acceptable 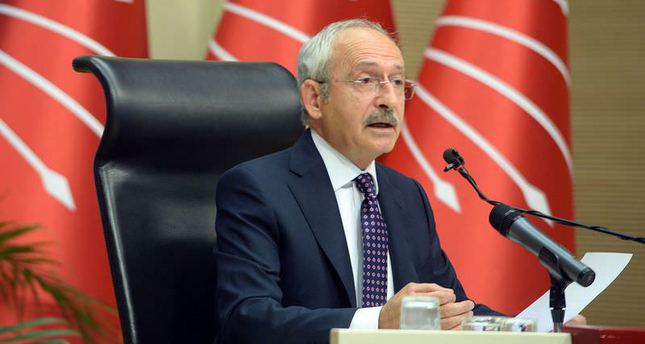 by Daily Sabah Oct 16, 2014 12:00 am
In an interview on CNN Türk, main opposition Republican People's Party (CHP) leader Kemal Kılıçdaroğlu said that he did not support the agreement between Turkey and the U.S.-led anti-ISIS coalition to train and equip moderate Syrian opposition fighters who would fight against the Islamic State of Iraq and al-Sham (ISIS) and the regime of Syrian President Bashar Assad.

As U.S. officials arrived in Turkey to negotiate with Turkish officials regarding the coalition demand to use Turkish bases, Ankara pushed for the establishment of a safe zone and no-fly zone along the Syrian border. The agreement on training and equipping moderate Syrian fighters was made between the two countries and details are continuing to be clarified.

On Wednesday, Kılıçdaroğlu touched on the CHP's stance toward numerous issues in the region including the ISIS threat, talks between Ankara and Washington to clarify Turkey's position in the coalition and the Assad regime.

Emphasizing that he had held talks with the Assad regime before the violence in Syria escalated, Kılıçdaroğlu said that in the CHP's talks with Assad he stressed that freedom should be ensured in the region.

In an abrupt shift, the CHP leader added, "Producing policies that put these people in difficult situations is treason […] These are innocent people, but what put them in a tough situation is the wrong policies followed by the government."

He further stated that if the CHP had come to power, the government would have called on the international community to intervene in the Syrian war and added that the only way out of this issue is through the U.N.

When asked about the CHP's stance toward the U.S. demand to use the İncirlik base, which is a key installation along the Turkish-Syrian border, Kılıçdaroğlu said that if it is available within the scope of law, the base can be used by the coalition to fight against ISIS.

The main opposition voted "no" on a mandate in Parliament that allows Ankara to send troops into Syria and Iraq if necessary. However, the party last week gave the green light to support the mandate, authorizing Turkey to send troops to Iraq and Syria on the condition of limiting its scope.

Kılıçdaroğlu was quoted as saying, "The CHP will support the latest parliamentary motion as long as it is limited to repelling ISIS and rescuing Kobani [from ISIS]."

Kılıçdaroğlu further said that he is not against Egyptian President Abdel-Fattah el-Sissi, who ousted the first post-revolution elected president, Mohamed Morsi, with a military coup, and reiterated that international platforms have accepted Sissi's presidency.

Morsi, who won Egypt's first free presidential election in 2012, was ousted by the military in July last year following protests against his first and only year in office. Following his ouster, relations between Cairo and Ankara soured with Egypt downgrading its diplomatic relations with Turkey to the level of charge d'affaires and recalling its ambassador from Ankara. Turkey responded with the same measures, declaring Egypt's ambassador to Turkey persona non grata.