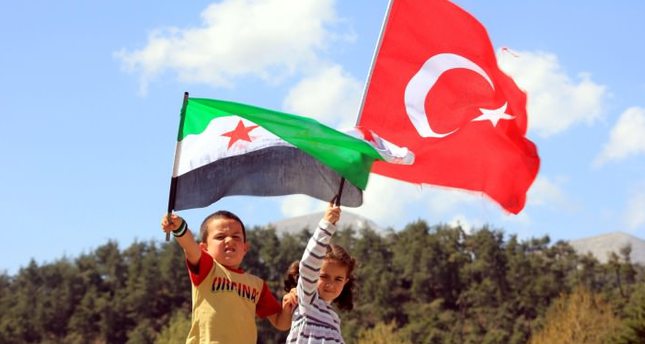 by Fatih Şemsettin Işık Oct 16, 2014 12:00 am
As Turkey is getting prepared to take an active role in the U.S.-led international coalition's fight against the Islamic State of Iraq and al-Sham (ISIS), recent developments demonstrate that the coalition cooperating with Turkey is vital for the future of the region.

ISIS has been advancing on the town of Kobani in northern Syria resulting in an influx of around 200,000 Syrian Kurds into Turkey over the last three weeks. The armed People's Protection Units (YPG), an offshoot of Turkey's outlawed PKK, are continuing their fight against ISIS but are outmatched in number and technological capacity.

Both President Recep Tayyip Erdoğan and Prime Minister Ahmet Davutoğlu have stressed in recent days that Turkey's involvement in the fight against ISIS is conditional upon ground troops not being deployed in Syria, the enforcement of a no-fly zone over Syrian territory near the Turkish border and the creation of a safe zone inside Syria. Earlier this month the Turkish Parliament gave the government the green light to take military action against ISIS in Iraq and Syria but Turkey's military has yet to make a move.

Nevertheless, academics say Turkey's position should be taken into account in case of a likely military action against it as it is a NATO-member country directly influenced by events in Syria.

John Esposito, a professor of international relations and Islamic theology at Georgetown University pointed out that Turkey has had a strong stand against terrorist groups throughout its history and underlined the fact that ISIS is a threat for nearby countries. In an interview he gave to the Analyst this month he said, "A U.S. anticipated strategy's being practiced by Western countries might not be difficult.

Esposito also underscored that Turkey's prudent attitude must be regarded: "[…] Turkey developed a more cautious approach since Turkish diplomats had become hostage in Mosul. On the one hand, Turkey wants to cooperate with the U.S. and European Union considering its relations with them. On the other hand, it assumes a reluctant attitude regarding the threat of ISIS in its neighbors, Syria and Iraq and refugees have risen up to millions in the country."

Martin Schaefer, the spokesman for Germany's minister of foreign affairs, noted that Turkey is directly influenced from developments in the Middle East as a country that has a long border with Syria and Iraq.

According to Professor Paul J. Sullivan, an expert of the Middle East and energy security at Georgetown University, Turkey's critical role and assistance is essential and unless the coalition cooperates with it and Turkey becomes active in the fight with ISIS, Turkey may face more violence within its borders. He said, "The longer Turkey waits, the more dangerous the streets and the more powerful ISIS may become. [Bashar] Assad also can benefit from delay. Turkey is facing a Catch-22 situation. No matter what it does there will be a big problem for it."

Sullivan also touched upon Turkey's role in the Islamic world and highlighted the necessity of the fight against ISIS. "It is time for the most powerful Muslim states to work together to rid the world of false Islam in the face of extremism in all places. ISIS and groups like it are the greatest threat to Islam since the Crusades of long ago," he said.

For Şaban Kardaş, president of the Center for Middle Eastern Strategic Studies (ORSAM), Turkey's demand for a solution in which its current Syria policy is aggregated with the fight against ISIS is legitimate and convenient for its policy in the Middle East.

"Ankara's assuming the attitude and putting demands on the table in response to using military methods in the fight against ISIS is compatible with its policy of international intervention in the Middle East. It can be said that Turkey's approach to the ISIS issue is based upon dealing with its political roots in Syria and Iraq and prioritizing local actors in the military struggle," he said.