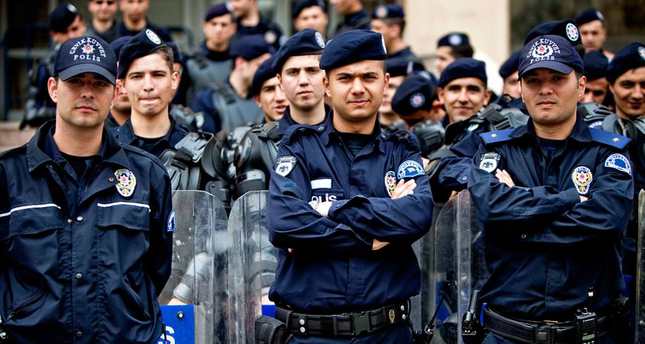 by Daily Sabah Oct 16, 2014 12:00 am
Ankara has decided to go with the German model in the fight against street violence, which will mean security forces will be granted sweeping powers to crush protests by using arms to counter protestors during unauthorized protests without permission from a superior officer.

The need to adopt new laws over tightening the country's security surfaced after illegal protests erupted on Oct. 6 predominantly in Turkey's southeastern provinces in response to Islamic State of Iraq and al-Sham (ISIS) militants' penetration of the Syrian Kurdish town of Kobani, also known as Ayn al-Arab.

Ankara, which aims to lift the country to Western standards regarding its security laws, discussed which path to follow before finally settling on the usage of the German model, deeming it the most appropriate for the country's situation.

According to the new reform, officers will be permitted to use arms against offenders in protests.

Aggressive protestors will also be detained without the requirement of a court order, a rule adopted from the German template as well.

The government also hopes to double the sentences handed down for the offences in question to raise security standards to Western levels with the upcoming changes.

The discussions of the legislation in question, which aims to give expanding powers to police officers to quash protests, are still under way in Parliament.

Speaking at a press conference ahead of the regulation's discussions, Deputy Prime Minister Numan Kurtulmuş said, "There has been a consensus on the need for a security reform in the country after numerous dialogues and discussions were carried out over the issue. Solid measures were deemed necessary to enhance the security level of the country and the reform intends to invigorate Turkey's democracy contrary to concerns that the changes might adversely affect it."

Kurtulmuş said Turkey will not deviate from its democratic line while imposing tougher security measures, assuring the public over a controversial regulation that seeks to further empower security forces.

Touching on the deadly protests that were sparked by PKK sympathizers, Kurtulmuş underlined that Turkey has become a location close to the ring of fire and precautions to maintain the country's security should urgently be taken. He put a spotlight on the sensitivity of the process Turkey is going through as it is under the massive threat of ISIS attacks that continue apace in a region close to the country's territory and said more attention must be paid to security issues since attempts to cripple Turkey's security might resume.

"They are only preventive precautions. The changes will not harm democracy nor will they hamper the reconciliation process," Kurtulmuş said, adding that a balance must be struck between democracy and security in the newly presented regulation.

The government's intention to adopt tighter security rules to prevent street violence sparked debate among opposition parties who expressed concerns over a possibility that the excessive powers to be bestowed on the security forces could be exploited. Experts consider that voiding balancing steps, the legislation granting more powers to security forces could engender devastating results for the country.

Kurtulmuş, in response to such concerns, said the government will refrain from violating the rights of citizens who have nothing to do with the protests and the precautionary acts will only be against those perpetrating violent acts. He also underlined that the balance between democracy and security will be preserved and every detail has been accounted for in preparing the measures.

"We will never give up the will to further democracy and the reconciliation process," Kurtulmuş said, concluding his speech.