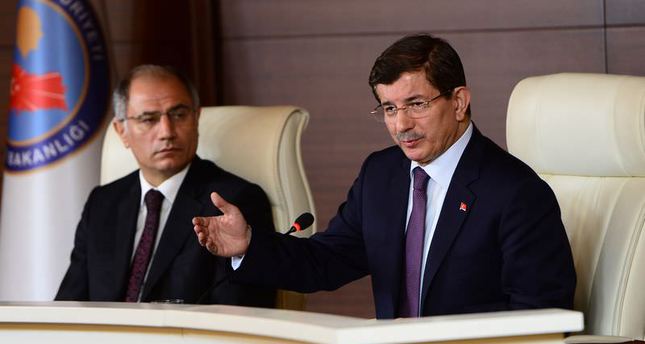 by Daily Sabah Oct 16, 2014 12:00 am
"Only Syrian-Kurds can cross the Turkish border to fight against ISIS in Kobani," Turkish Prime Minister Ahmet Davutoğlu said on Wednesday during a press conference following a meeting in the Interior Ministry.

Davutoğlu, answering a question whether Turkey will open its borders along with Syria for PYD forces said, "Turkey has never closed its borders to Syrian refugees crossing into Turkey, two thousand people have crossed into Turkey in recent days, otherwise they would be dead by now but when it comes to Turkish citizens crossing into Syria, we cannot let them be a part of the fight there, no matter which side they will be fighting for."

Davutoğlu said that Syrian Kurds are free to cross Turkey border to join the Kobani fight. "Kurdish soldiers from Kobani came to Turkey and did not want to return there. As a matter of fact 300 PYD soldiers laid down their weapons and crossed into Turkey, they can go back any time they want."

During the conference, Davutoğlu also announced the new legislation to combat vandalism, referring to the recent pro-PKK protests he said, "Freedom to demonstrate can only occur in a peaceful environment. In recent street violence we have lost 33 citizens and not because of restrictions on freedom but because of these violent attacks."

Davutoğlu assured the reporters that there will be no restriction on the freedom of demonstration as long as it is peaceful and said there will be no tolerance to any kind of violence that targets Turkish citizens' safety.

The new legislation that is on the government agenda allocates more power to the police in case of violence. Should the German model be enacted, the police will have the authority to detain suspects and take them to a protected area. The new legislation not only expands the power of the police, but also places stricter punishments for offences such as damaging public property and concealing identities by wearing masks during protests and the use Molotov cocktail.