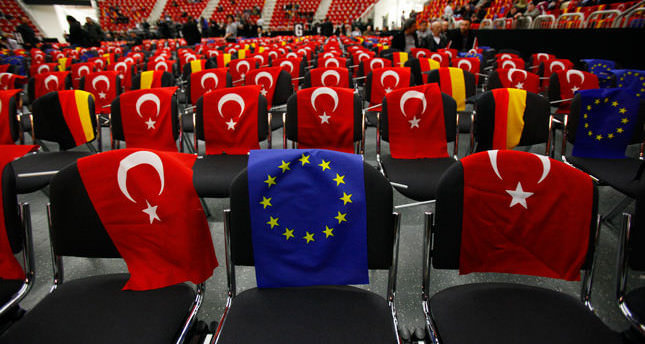 by Ali Ünal Oct 16, 2014 12:00 am
EU Minister and Chief Negotiator Volkan Bozkır announced European Turkey's EU Communication Strategy, which is one the three pillars of Turkey's New European Union Strategy that aims to eliminate obstacles to EU membership by accelerating the dynamics of EU-Turkey relations, on Thursday in Brussels.

Speaking at the announcement meeting, Bozkır said that the new communication strategy will contribute to Turkish society's internalization process of the socio-economic reforms as well as restoring Turkey's public perception of EU countries. Bozkır added that as part of this strategy, in addition to conventional communication methods, social media and digital technologies will be used effectively.

According to Bozkır, in order to create the right perception and increase public support for Turkey's EU accession process the communication strategy has two dimensions – domestic and international. While the domestic strategy is aiming to increase public support for the EU in Turkey, the main goal of the international dimension aims to change perception in Turkey of the European public. Turkey's contribution to the EU will be highlighted and the "Strong Turkey, Strong EU" message will be emphasized in various communication platforms.

Because the perception of Turkey differs greatly in different EU member countries, Bozkır said, "In this context we will develop different strategies for different countries and we are going to implement different courses of action that will contribute to the image of Turkey," he said. He stressed that Turkey's current negative perception in some EU countries does not reflect reality and added that restoring this perception will be their top priority in the coming period.

He underlined the responsibility of civil society organizations to implement this strategy, and thus they allocate 180 million Euros (TL 520 million) in resources for the strengthening of civil society and civil society dialogue in the coming period. Bozkır also noted that they will encourage lobbying activities in favor of Turkey.