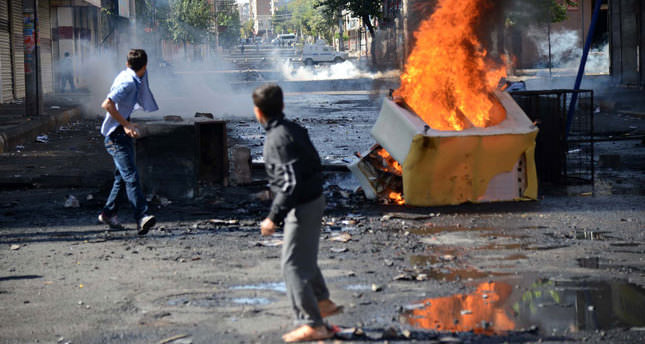 Despite major stumbling blocks and crises, the government is keeping to its promise to accelerate the reconciliation process with a new road map while the pro-Kurdish HDP pledges its full support

Determined to continue the reconciliation process between Ankara and Kurds, which started with Justice and Development (AK) Party initiatives, Ankara introduced a road map on Wednesday aiming to end the three decades of conflict in southeastern Turkey. A Peoples' Democratic Party (HDP) delegation consisting of Deputies Pervin Buldan, İdris Baluken and Sırrı Süreyya Önder is expected to visit senior PKK members in Iraq's Qandil Mountains. Subsequently, the same delegation will visit PKK leader Abdullah Öcalan, who is serving a life term on İmralı Island, on Oct. 21 to discuss the government's road map. HDP Group Deputy Chairman İdris Baluken released a statement on Monday that said the government has shared a draft road map pertaining to the reconciliation process. Baluken emphasized that ceasing the process is out of the question as talks between Ankara and the HDP are continuing in a determined manner.

Twenty-four members of the Wise People Commission – tasked with promoting the peace process and explaining it to the public – also gathered on Wednesday and released a joint statement saying that the process should continue by taking democratic politics into the center and denouncing all sorts of violence. "We are ready to make a civilian contribution to the process. Our commission will take necessary steps to do its part and thus, we will ask to hold meetings with the president, prime minister and other government officials," the statement read.

The commission was first introduced in 2013 and it worked toward mediating between Kurdish and Turkish communities to improve the climate for peaceful relations in the country. The group further said in its statement that it will work toward publishing jailed PKK leader Abdullah Öcalan's words directly to the public, rather than through pro-Kurdish deputies visiting him on İmralı Island.

Turkey's Kurdish population roughly composes 20 percent of the country, which means the HDP receive around one-third of Kurdish votes. Despite threats by the PKK's armed wing to halt the reconciliation process, the majority of Kurds – both HDP and PKK sympathizers as well as others who support various other political parties – showed huge determination and contribution to the process that aims to solve Turkey's Kurdish problem through political means.

After calling on Kurds for a "sarhildan," uprising in Kurdish, to protest the ISIS assault on Syria's Kurdish-populated city of Kobani, HDP leader Selahattin Demirtaş has been at the center of controversy when over 30 Kurds died as result of clashes between pro and anti-PKK groups. Demirtaş's call also brought criticism from his own party. HDP Deputy Altan Tan said the party was not managing the process well and that it also lost the trust of vandalism-hit Kurdish locals, religious Kurds and leftist Turks, as violent clashes witnessed Turkish flag burnings, mosque attacks and looting.

Parliament recently passed a bill that gives its peace process with the PKK a legal framework, which is a step that will advance the reconciliation process. The bill, described by Öcalan as "historic," is the first time Turkey officially announced that it wants the PKK to lay down its arms and its fighters to rejoin their families. The reconciliation process is about putting weapons aside and choosing words, thoughts and politics, the bill said.

Explaining that the HDP would not make any decisions to hamstring the reconciliation process, Baluken said in a statement: "As the political representative of the issue, we will continue to keep our end of the bargain and do whatever we can as long as the will of the reconciliation process persists and all sides make the effort to achieve a permanent resolution." He further explained that the HDP and Ankara are currently in the process of dialogue and continue to discuss the matter. However, Baluken also said that they did not see the comprehensive details of the road map including issues such as legal reforms, democratization initiatives and other aspects pertaining to establishing a permanent resolution.

Baluken also said that Öcalan has emphasized the need to bring the protests in support of Kobani, resulting in the death 34 people, under control to avoid damaging the reconciliation process. He said that the protests were plotted to halt the process.

The Justice and Development Party (AK Party) government initiated the reconciliation process to bring a permanent solution to the country's 30-year-old conflict between the PKK, which is recognized as a terrorist organization by Turkey, the EU and U.S., and the Turkish Armed Forces, and has put an end to violence through a series of democratic reforms and economic investments to boost stability in the region. As part of the reconciliation process, Turkey's National Intelligence Organization (MİT) has paid visits to Öcalan to discuss ways to resolve the matter.