Turkey’s new EU strategy to be announced in Brussels 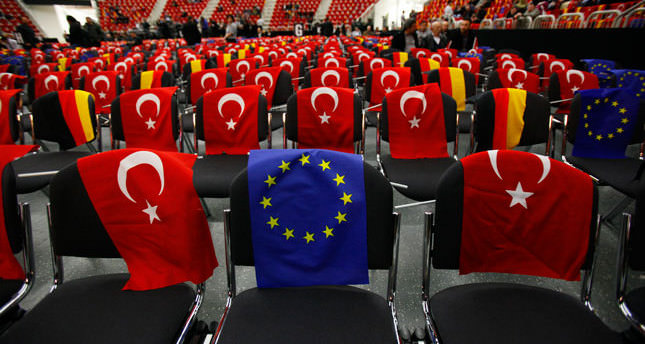 Last month, Bozkır announced that Turkey's New European Union Strategy – the EU negotiation plan that aims to eliminate obstacles to EU membership by accelerating the dynamics of Turkey-EU relations, will be based on three pillars: the political reform process, socio-economic transformation in the accession process and EU communication strategy.

In recent weeks, Bozkır gave a presentation to Cabinet members about the communication strategy, which and the Turkish government later accepted. In an interview with Daily Sabah last week, Bozkır said that that the communication strategy has two principal elements. "These are the EU's perception of Turkey and Turkey's perception of the EU. Regarding this, we will effectively utilize nongovernmental organizations, the business world, universities, unions and such [to facilitate the process]," he said.

During a visit to Brussels, Bozkır will have meetings with the EU Enlargement and Neighbourhood Policy Commissioner, Štefan Füle, the Chairman of the European Parliament Committee on Foreign Affairs, Elmar Brok, the EU's new Turkey reporter, Dutch parliamentarian Kati Piri and other European officials. Bozkır also will address the European Parliament's Foreign Affairs Committee and exchange views and comments with committee members.

The EU Ministry recently revealed a report about Turkish strategy for the EU for the upcoming years. In the report, the EU ministry presented their three-step strategy for securing EU accession in accordance with the 62-point Government Program. Reports underlined Turkey's three-step strategy as follows; political reform, socio-economic transformation and EU communication strategy. The EU ministry describes their new strategy as the "strategy that will lead to a boost in the reform process and establishment of new communication channels between Turkey and the EU."

The first step of the strategy for Turkey will be the political reform process in which Turkey intends to carry out the reformation process compliant with international law, zeitgeist social demands and, most importantly, in accordance with the New Turkey's pluralistic, liberal and participatory democracy goals, reports indicated. Moreover the most important element of the political reform process is the removal of the imprints of the 1980 military coup, presenting the need for a new constitution to realize the objectives emphasized in the report.

The report said: "Although fundamental laws and legislation have already been repealed or amended, all legislation bearing the imprints of the military coup of Sept. 12 will be reviewed in detail under the work for a new constitution…Hence, the systemic problems stemming from the current constitution which pose obstacles to a stronger democracy, fundamental rights and freedoms and rule of law, namely to the construction of the new Turkey, will be eliminated." The report also underlines the balance between security and freedom in the first part of their strategy.

Socio-Economic Transformation in the Process, as the report underlines, is required for the implantation of the political reformation process. "The sustainability and consolidation of this great change in Turkey requires not only proper implementation for the reformed legislation but also an accompanied change in mentality," said the report.