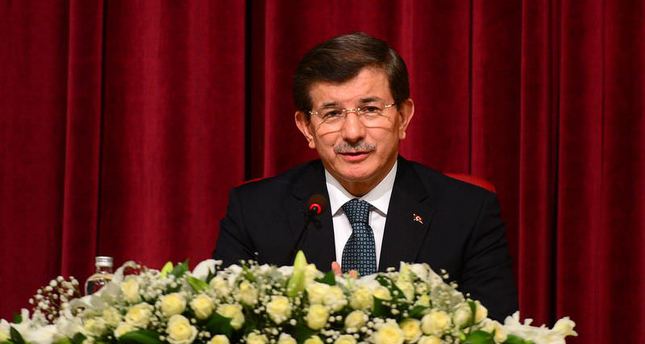 by AA Oct 17, 2014 12:00 am
Turkish Prime Minister Ahmet Davutoğlu said on Friday that Turkey's Kurdish reconciliation process is not unidirectional and that negotiations will be conducted with all relevant parties.

"We will continue our efforts both by coordinating with all sides and by making reforms at a social level," he told the media during a press conference at the Turkish Directorate of Religious Affairs.

Davutoğlu was speaking about Turkey's reconciliation process, an effort launched early last year by the Turkish government to secure an end to the decades-long conflict with the outlawed Kurdish separatist terror group, the PKK, which has claimed the lives of more than 40,000 people.

He reiterated the resolute position of his cabinet to settle the issue as soon as possible and root out terror in Turkey's eastern region, which he said was one of the top priorities of the new AK Party government.

"It is a process that we launched by our own will and one that we will pursue likewise. We won't abide by anyone else's position on whether to pause or continue the process," he added.

When asked about reports over the alleged granting of official negotiator status to the PKK's imprisoned leader Abdullah Öcalan, the Turkish premier stressed that the reconciliation process talks do not have only one addressee or one direction. Rather, all related parties will be involved in the process.

He reminded the audience that they have started to hold regular talks once a fortnight with the newly-established 'reconciliation process council' -- a new step initiated by his government -- to guide the efforts to solve the Kurdish issue as soon as possible.

Davutoğlu noted that last week's deadly and illegal protests across the country, which were ostensibly held to show solidarity with Syria's ISIS-besieged Kurdish-populated town of Kobani, aimed at undermining and shattering the positive mentality in the region enabled by the ongoing solution process.

The pro-Kurdish protesters took to streets across Turkey under the pretext that the Turkish government was allegedly doing nothing to halt the advance of extremists pouring into the Turkish-Syrian border town Kobani, which has become the scene of fierce street battles between Kurdish groups and ISIS militants.

The violent protests left at least 34 people and two policemen dead. Scores of vehicles, state buildings, party offices and shops were set on fire and damaged.

Davutoğlu stressed that if steps are taken only by his government, they will fall short of rebuilding the positive atmosphere in the region, saying "we need wise men to raise and further strengthen social awareness."

He was referring to the 'Board of Wise People' -- a consultative body to oversee the ongoing efforts of the reconciliation process.

On Sunday, Davutoğlu is scheduled to receive the 'Wise People' in Istanbul to discuss problems related to the Kurdish issue.

The 63-member committee includes writers, columnists and academics, in addition to many other figures with differing political views as well as different religions and ethnic backgrounds.

During the meeting, the board is expected to present a report to the prime minister about recent developments as well as an evaluation of the overall reconciliation process.

The meeting will also discuss what steps should be taken next.