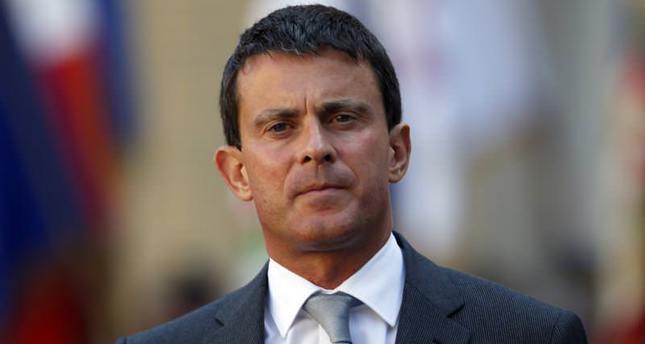 by Daily Sabah Oct 17, 2014 12:00 am
France supports the idea of setting up a buffer-zone between Turkey and Syria to create a safe haven for displaced people, French Prime Minister Manuel Valls said during Wednesday's parliamentary session. "France supports the idea of creating the buffer-zone or a safe zone that Turkey demands," he said. French President Francois Hollande's office also released a statement recently supporting the safe zone. "[The president] insisted on the need to avoid massacres in the north of Syria. He gave his support to the idea proposed by President [Recep Tayyip] Erdoğan to create a buffer zone between Syria and Turkey to host and protect displaced people," the statement read. The statement added that the two countries also agreed on the need to give more support to the moderate Syrian opposition to fight Syrian President Bashar Assad and Islamic State of Iraq and al-Sham (ISIS) militants.


Furthermore, France will keep delivering arms to Kurds fighting ISIS militants in Syria, Hollande said, as battles were raging between the two groups in Kobani, near Turkey. The French government will "do everything to help" those fighting against ISIS, especially Kurds, by delivering "adapted weaponry," Hollande said Wednesday, according to government spokesman Stephane Le Foll. He didn't specify what arms France will deliver. France was the first country to join the U.S.-led coalition against the ISIS group in Iraq, but it hasn't been taking part in airstrikes in Syria. Hollande confirmed last August that France has been delivering weapons to Syrian rebels who face both the troops of Assad and ISIS. Efforts to destroy ISIS are not enough, Erdoğan said recently, adding that the Assad regime, which annihilates towns like ISIS is in Kobani every day, should also be targeted. Erdoğan also said that Turkey would continue the fight against ISIS but demand the U.S. to set up a no-fly zone and safe zone. Erdoğan reiterated the necessity of forming a no-fly zone and a safe zone in Syria, along with continuing the U.S.-led international airstrikes on ISIS targets in northern Syria.

"A no-fly zone and a safe zone should be established so we can place the Syrians inside our country in these safe havens," he said. Ankara it needs a safe haven near the border to halt the massive flow of Syrian refugees fleeing ISIS attacks inside Syria. The inflows started on Sept. 19 with more than 150,000 Syrian Kurds having recently passed into Turkey from the town of Kobani in Syria.
Last Update: Oct 17, 2014 3:19 pm
RELATED TOPICS