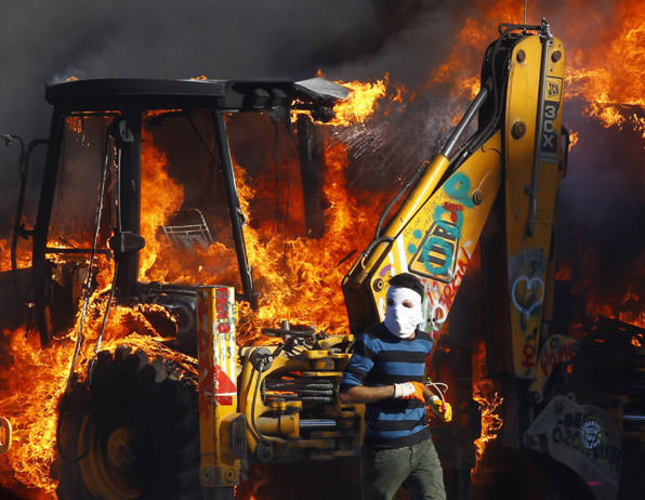 After dozens of people were killed in recent clashes between pro and anti-PKK Kurdish groups, Ankara stepped up efforts to introduce new security reforms, which will be formed in accordance with Western standards

Government officials have assured the public that no practice that differs from the legal rules of western democratic states will be brought under the new security reforms that seek to give broad powers to security forces to stamp out protests.

A group of deputies from the ruling Justice and Development Party (AK Party) submitted a draft bill to Parliament Tuesday evening that will empower security forces by expanding their powers of search, seizure, detention and arrests.

The need to adopt new laws for tightening the country's security surfaced after the unsanctioned pro-Kobani protests erupted predominantly in Turkey's southeastern provinces, sparked by Islamic State of Iraq and al-Sham (ISIS) militants' penetration into the Syrian Kurdish town of Kobani, which is also known as Ayn al-Arab, on Oct. 6.

Prime Minister Ahmet Davutoğlu, speaking at a meeting at the Interior Ministry, said the envisaged changes were necessary in order to avoid similar instances of vandalism and street violence, referring to the deadly protests that claimed 35 lives.

"We will never give up from our right to freedom and democracy," Davutoğlu said. The government, which aims to lift the country to Western levels regarding its security laws, has been discussing which path to follow. It finally settled on the usage of the German model, deeming it the most appropriate form for the country.

The government's intention to adopt tighter security rules to prevent street violence sparked debates among opposition parties who expressed concerns over the possibility that the excessive powers bestowed on the security forces would be exploited. Experts consider that void checks and balances, the legislation that grants more powers to security forces can engender devastating results for the country.

In response to such concerns, Davutoğlu said, "Granting police officers with unlimited authorities is out of question. The powers given to the police will be restricted and defined. They will account for any violation of authority in the face of [the] law." He added that the government will not deviate from its democratic line while imposing tougher security measures.

According to the proposed changes under the new security reforms, officers will be permitted to use arms to counter protestors during unauthorized protests without permission from a superior officer. Demonstrators involved in aggression will also be detained without the requirement of a court order. The government also hopes to double the sentences handed down for the offences in question.

While assuring the public that officers will abide by the rules of the state and have a kind attitude toward demonstrators in a peaceful protest, he underscored that tolerance will not be shown to those who engage in vandalism and aggression during unsanctioned protests.

"The reform that we are currently working on is not a package of measures regarding authorities for the police. It is security reform that we intend to adopt and we will do it using Western templates seeking to protect the rights of citizens and remove any obstacle posed against citizens' personal rights." Davutoğlu added.

Deputy Prime Minister Beşir Atalay also commented on the recent controversial security reform and said the country will continue to be run by laws. "We are a country who carries out negotiations in accession to the European Union, and thus we seek to adopt the norms of the European Union concerning our domestic affairs as well," Atalay said.