PM: We open our doors to all those who are oppressed 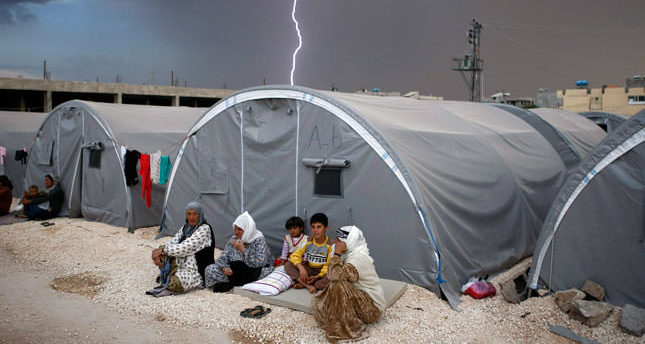 Throughout history Turkey has been a safe haven for oppressed people around the world and would continue to be so in the future, said Prime Minister Davutoğlu at an exclusive event for the people of the Gaza Strip

Prime Minister Ahmet Davutoğlu said in his address at the Living Gaza event organized by the Ankara-based Yunus Emre Institute on Friday that Turkey will continue to open its doors to all oppressed people around the world. Referencing his visit to Gaza in 2012, Davutoğlu stressed the unity he witnessed among oppressed people by quoting a Gazan man's statement: "I saw you in Arakan the other day, hugging the suppressed Rohingya Muslims there. Please do not leave them alone." Davutoğlu said that even though Gazans defended Gaza, they are also worried about people to whom they are bound by history. Narrating the heartbroken story of a father whose daughter, Youse, was killed in an Israeli airstrike, Davutoğlu said, "His tears were not only those of a father shed for his daughter, but tears of all of humanity." "The struggle of Palestinians represents the aspiration of all oppressed people in the world," Davutoğlu said, in reference to those being oppressed and facing violence across the world and in the region.

Later in his speech, he talked about what he saw at Gaza's Shifa Hospital where he and his wife were welcomed with Turkish flags as Israeli bombs raided down on the area.

Although difficult to express his feelings, Davutoğlu said: "After visiting the hospital, we were in tears and felt ashamed in the name of all humanity."

Portraying the Palestinian struggle as a symbol of all oppressed people around the world, he said that Turkey openheartedly embraces the millions of Syrian refugees on its soil with the same eagerness it shows to Palestinians from Gaza.

He said that when Palestinians fight for their noble cause, they do so as if they are also fighting for the oppressed people of Myanmar's Arakan state, Damascus, Baghdad and Somalia.

Since the beginning of the Syrian war that has destroyed not just the country but also the lives of Syrians by displacing them, Turkey has opened its arms to its war-weary Syrian neighbors. Crossing the border barefoot, in wheelchairs and crawling while trying to carry their bags – some of them heavier than their own weight – Syrians have been fleeing to Turkey for the last four years since the beginning of the Syrian uprising in which the people asked the Bashar Assad regime to uphold democracy and freedoms in the country. It has since turned into a savage civil war killing scores of people and the Islamic State of Iraq and al-Sham (ISIS) advance triggers fear in displaced Syrians. Since 2011, nearly 1.5 million Syrian refugees have fled to Turkey.

In line with the increasing number of refugees, Turkey has been continuously developing its facilities and services to provide better living condition to refugees. The refugee camps in Turkey are far better than those in other countries to which refugees fled and U.N. observers in the camps said the level of assistance provided exceed international standards. No smell of garbage, existence of infrastructure, X-ray devices at the entrances, education centers and playgrounds make refugee camps in Turkey the best in the region.