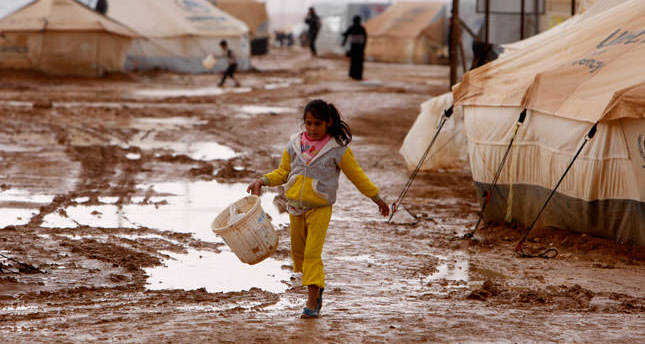 by Ayşe Şahin Oct 18, 2014 12:00 am
"I have little strength left to contend with the rigors I face here," said Azizah, a Syrian mother of three, alluding to her new life as a refugee in Turkey.

Already fighting with the pain of losing a husband to war, Azizah now copes with different kinds of hardships, with homesickness taking the lead.

"We just don't belong here," she said, her comment accompanied by a bitter look on her face. She took a deep breath as if to maintain the remaining vigor she possessed before she continued her heartbreaking story:

"We fled our house after my husband died in the civil war a year ago, which was a terrible agony for all of us. But what was even more horrible for me was to watch the place I spent my whole life turn into ruins. I felt I left my pains all behind when I first came here, but they just come flooding back, making it harder for me to adapt."

Azizah is among the 1.5 million refugees taking shelter on Turkish soil. As Turkey began hosting thousands of war-torn Syrian refugees who fled violence that surfaced with the civil war in 2011 and continued apace with the rise of the ISIS threat in their native land, the rigors these refugees have to face in a "foreign" land, the aftermath of their migration, have come under the spotlight. The protracted refugee situation in Turkey that is about to enter its fourth year has some consequences that need close monitoring.

Officials recently announced that the number of Syrians taking refuge in neighboring Turkey is nearing 2 million since the civil war began, out of roughly 9 million sheltering in various other countries across the world. Moreover, the violence that could not be subdued in Syria and keeps escalating has forced these refugees to avail themselves of shelter from another state.

Although the Turkish government deserves all the credit with the assistance it provides for these refugees – mainly by permitting their entry into the country and establishing camps for the indigent refugees – they seem to need a little more time to adjust to their new life.

Behind these refugees are individual tragedies since they cope with the feeling of loss, losing a family, a relative or a friend to war. An unfamiliar feeling began to dominate these refugees in countries they fled to – homesickness. The misery stemming from the separation from home was added to their already existing problems caused by war. Most of them fled their homes leaving everything behind: personal belongings, their jobs, their happiness and sorrow, their memories – in short, what truly makes them.

Although Syrians and Turks share similar religious practices and beliefs, a blatant cultural difference makes it tough for both communities to integrate with each other. The difference appears to be more striking in cities, as their presence draws more attention in fussy environments.

Finding appropriate jobs with proper salaries is among other concerns of the Syrians. Azizah said she had to somehow find money to feed her children, and since she lacked the necessary skills to get a proper job, she had no choice but to resort to begging to get by.

"People level cold glares at us when we beg. I know it is a bother when a beggar approaches you to ask for money, but unlike other beggars in Istanbul taking the easy way out to make a living, we do it out of necessity. We are not given jobs. I don't know why, but people here don't seem to count on us. I am willing to work for a little money, but that does not happen," Azizah said.

Refugees who refuse to spend their lives in camps allocated for refugees – as they prefer not to be tied to any particular place – move to metropolitan cities unaware that they will be driven to begging for lack of available job opportunities.

The social isolation they face also seems to be more severe for refugees in cities, as commuters are already uncomfortable with the country's open door policy and believe that it has brought an economic burden to the nation.

Financially speaking, it's true the picture is not very pleasing for refugees, if not usually as disastrous as Azizah's tale. Syrians currently have the lowest income among all others residing in the territory. They are okay with low salaries offered to them out of despair of not being able to get a job with a proper salary. These refugees' accepting offers of low salaries have lowered the bar, engendering another problem for citizens of the country who seek jobs with higher salaries.

"I am a cutter in the textile business and have been looking for a job since I quit my previous job. It has been two months, and I still can't find a job with a fair salary. Employers in the sector began to hire Syrians not because they are more skillful than us, but because they accept low salaries," said Murat, a Turkish citizen, expressing discomfort over how the refugee influx has influenced his economic condition.

Aboud Adandachi, another Syrian taking refuge in Turkey, feels lucky that he can take his job with him wherever he goes. He finds it hard to understand why Syrian refugees become beggars, believing there is no shortage of people willing to assist them in Turkey.

Adandachi came to Turkey a year ago, fleeing the civil war like many others. Three of his cousins died fighting against the Assad regime. Although he had never been in Turkey before, he said he preferred settling in Turkey to Lebanon thinking it too was a region with high tension. His choice turned out to be well founded as he discovered that he could not be happier elsewhere after witnessing the warm reception by Turkish people. The bureaucratic ease and assistance provided for Syrian refugees were among other factors why he has thus far never regretted moving to Turkey.

"I couldn't ask for anything more. Living here is advantageous, even as a refugee. Nobody judges you here, and people are so welcoming."

But when asked whether he would like to return to his homeland someday, "Absolutely, yes!" he answers. "I appreciate this country for every single step it takes toward facilitating conditions for the refugees, but there is no way I could feel at home here," he adds.

He further asserts that 90 percent of the refugees would rather go back to Syria than stay here permanently – unless the peace in the region is not restored.

"Only if the conflict continues for decades, could the refugees lean towards staying here permanently, as the coming generations will be brought up in this territory adopting its culture, language and values," he says.

Fighting with nostalgia and social isolation, the Syrians here are obliged to be content with what life serves them in a land totally foreign to them.

Yes, they currently enjoy security that is still lacking in their homeland, but other social problems they face out here are nothing less than that. Going through the severest of homesickness, being more than a simple nostalgic reaction as they lost almost everything to the war back home, the distress these people go through shall in no way be underestimated.

In theoretical terms, the refugees should be provided with educational, curative and preventive programs for assuring a healthy mentality and improved social conditions for them, experts say. But whether these could be enabled by the state in the short run is debatable.