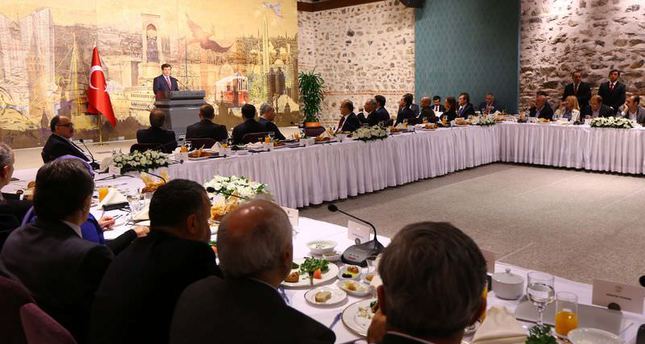 by Daily Sabah Oct 19, 2014 12:00 am
Prime Minister Ahmet Davutoğlu has attended a meeting with Turkey's Wisemen Committee at noon on Sunday as part of the reconciliation process and discussed the current situation of the process while the committee is expected to share their evaluations, concerns and suggestions with the government and propose to establish an arbitration board in efforts to bring a permanent resolution to Turkey's decades old Kurdish Question.

Addressing the Committee of Wisemen, Davutoğlu has drawn attention to the fact that monolithic structures are a feature of the past as they only bring pain in places where vibrant ethnic and religious sects exist. He expressed that sharing a common history and citizenship are the keystones of Turkey's reconciliation process which regards differences as cultural wealth instead of a threat. Likewise, he drew attention to the fact that a provocative group's actions may breed results which disregard all efforts to bring a solution to the Kurdish Question through the encouragement of taking violent actions when the process aims to resolve it through peaceful, democratic and legal means as he expressed many proposals of the Wisemen Committee on Kurdish reconciliation were considered and addressed in last year's democratization package.

"We are entering a brand new and optimistic era" said Davutoğlu, who stated that the reconciliation process will gain new momentum with the help of mutual understanding, legal grounds and support of the cabinet despite the violent protests between pro-PKK and anti-PKK groups which took place on October 6 and 7, killing 36 people. "Reconciliation Process is in no way an alternative to societal order" Davutoğlu expressed, implying that the government's willingness to resolve the issue should not give the message that people can violently take it to the streets, vandalize and kill others, posing a direct risk to public order. He added that politics cannot function in a place where there is no public order as its disappearance would strip people of their freedom to speak and express themselves.

"We have two alternatives at hand: to choose the unifying road based on mutual peaceful and respectful principles -which is what our government prefers-, or to choose a expansionist, sectarian road which is archaic and tribal principles" said Davutoğlu, who expressed that the role of the wisemen committee is especially important to ensure that the former road is chosen. He stated that the reconciliation process is a national, local and unique initiative and aims to resolve the Kurdish Question.

Following a recent meeting called "Civilian contribution to the Reconciliation Process," the wisemen committee has proposed to establish an arbitration board and has issued a report stating that societal support is crucial for the resolution of reconciliation process, while noting the formation of a legal framework and laws in cooperation with both sides is essential to secure the sustainability and future of the process.

Members of the committee throughout the country have expressed their desire to act as arbitrators to address a number of issues. Erol Göka, a representative from Central Anatolia Region has stated that an arbitration board seems logical and feasible to ensure that there is a 'single voice' - a non-political actor- to address the contradictions between PKK's imprisoned leader Abdullah Öcalan and other Kurdish actors. He added that it is crucial to take precautions to ensure that Turkey is not affected by the ongoing conflict in Iraq and Syria while noting that provocations should be prevented.

The President of Eastern Anatolian Regional Committee Can Paker has also emphasized the importance of civilian initiatives and expressed that the decision to establish an arbitration board would be decided by politicians. "As civilians we do not have the prerogative for such initiative but we can support and assist it" said Paker, who noted that the committee will be ready to undertake the role of arbitrators if politicians deem it suitable. Adding to these sentiments Yılmaz Ensaroğlu, the Committee's Southeastern Anatolia Region President has also expressed that both sides should approve the establishment of an arbitration board in order to function properly.

Ali Bayramoğlu, a representative from Marmara Region has claimed that the issue is currently in political deadlock and suggested that the committee of wisemen can help to resolve the deadlock through providing a civilian agent trusted by both sides. However, Bayramoğlu also noted that such civilian agents would need authorization by the government, which will be discussed at Sunday's meeting with Prime Minister Ahmet Davutoğlu.

Other members from the Wisemen Committee have drawn attention to the fact that the pro-Kurdish People's Democratic Party (HDP) should act in a more prudent manner and avoid using provocative language. More importantly, it was noted in the report that the reconciliation process does not only address the issues of Turkey's Kurdish population but is a strategy to build a peaceful future under the framework of democracy and laws.

"The reconciliation process is a political and legal project that has the highest amount of societal support in Turkey's history" read the report, expressing that societal support is the most important aspect to ensure a permanent resolution to the issue. Likewise, the report underlined that all approaches and calls which may lead to violence and pressure should be avoided as it would damage the reconciliation process and create tension, while emphasizing the need for starting initiatives from all segments of the society in Turkey which would allow socialization of the process through the creation of civilian dynamics.

The reconciliation process was initiated by the AK Party government to bring a permanent solution to Turkey's 30-year-old conflict between the PKK, which is recognized as a terrorist organization by Turkey, the EU and U.S., and the Turkish Armed Forces, and has put an end to violence through a series of democratic reforms and economic investments to boost stability in Turkey's southeastern region.
Last Update: Oct 20, 2014 12:21 am
RELATED TOPICS