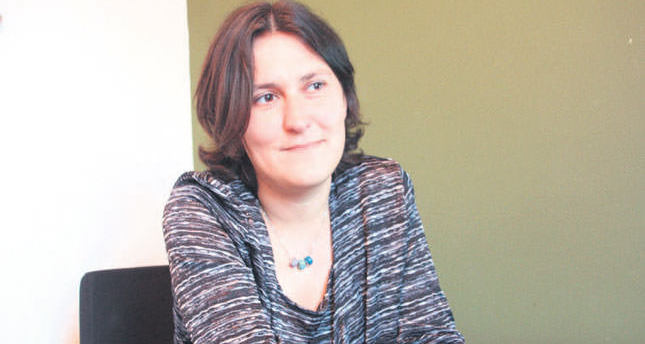 Kati Piri, the new rapporteur of the European Parliament for Turkey, stated that she finds Turkey’s newly announced EU strategy positive and welcomed the government’s determination on the reconciliation process that aims to end the decades-long conflict in southeast

Turkey's 2014 EU Progress report, which was announced two weeks ago, is accepted as an "objective and balanced" report, as it highlights both positive and negative aspects. Meanwhile, Turkey is also intensifying its efforts to re-energize the EU-Turkey relationship; therefore last week in Brussels, Turkey's EU Minister and Chief Negotiator Volkan Bozkır announced Turkey's EU Communication Strategy, which is one of the three pillars of Turkey's New European Union Strategy that aims to eliminate obstacles to EU membership by accelerating the dynamics of EU-Turkey relations. The Daily Sabah spoke with the new rapporteur of the European Parliament for Turkey, Ms. Kati Piri, about Turkey's EU bid and other regional issues.

What is your over all impression of the last progress report, regarding positive and negative aspects?

I think it's a very balanced report. The positive things that have been going on for the last year in Turkey have been highlighted and honestly praised. Among them of course, there is the settlement [reconciliation] process that was also conceived as a very positive step taken by the government, as opposed to what has been seen for the last couple of years. This is a clear credit given by the European Commission to the latest government in Turkey. The Readmission Agreement, which is very important for the EU, has also been ratified. There is an ongoing visa liberation process that is a crucial thing for Turkish people. These are positive aspects, on the one hand. On the other hand, concerns have been raised mainly on the rule of law and the quality of Democracy, which is the core of the EU accession process in my opinion. The concerning points there are about the independence of the judiciary, freedom of media and freedom of expression. These issues are also debated in the European Parliament, and the resolution calls on the EU to open negotiations with Turkey on Chapter 23 on the judiciary and fundamental rights and Chapter 24 on justice, freedom and security in order to accelerate reforms in these areas. Beside, there is a willingness from the Turkish government to intensify the talks through engagement with more dialogue.

Despite all the efforts from Turkey for opening up chapters 23 and 24 because of the blockage made by Greek Cypriots, talks have stagnated for a couple of years. Don't you think that it is conflicting to require Turkey to attain EU standards without any negotiations?

On the one hand, you're absolutely right. Not just me, but in the last report under the rule of this parliament, the opening of chapter 23 and 24 is called for. We know that it is not the Parliament or the Commission that did the blocking, but it is inside the Council. Frankly speaking, it is unlikely that this blocking will suddenly be removed. From this perspective, the best option would be to open negotiations, to look at the benchmarks and to make progress on that. On the other hand, I believe that what the EU sets as standards on the independence of the judiciary is quite clear. If the Turkish government wants to make progress on this issue, it does not have to wait officially for chapters to be opened, it can be done in different ways.

According to Turkey's EU Minister Volkan Bozkır, this is what has been done for the last couple of years. Even though some countries are blocking the opening of new chapters, he said Turkey accepts EU Standards as the standards of Ankara. Do you think that Turkey lacks success on this issue?

The progress report is produced in a way to maintain negotiations. Assessments made in the report on aforementioned chapters are based upon what the EU would set as the standard for negotiations. The criticisms there are about the ban on Youtube and Twitter, which points to concerns raised by the EU over the last year. I think it is time for the Turkish government to show that it wants to make progress and to reply to the balanced criticism in the report.

In the report, most of the criticisms are about incidents after Dec. 17 last year, saying that the Turkish government defended itself because these incidents were a judicial coup attempt orchestrated by Gülenists who had infiltrated the police and the judiciary. Is this explanation convincing for you?

To be honest, I've been appointed quite recently. Accordingly, this report is the basis of my work, and this is how I want to enter into a dialogue with the Turkish government, civil society and political parties to also hear their opinion. We want to formulate our assessments as the European Parliament and its rapporteur. But I also want to hear the opinions and responses of the Turkish side. I had a meeting with your minister that was the first of my term. I think it's enough to say that my assessment will be drawn up in the report. This is the stage for me to listen and to make an assessment, but take the criticism of the report on this issue very seriously. In the end, whatever is going on in Turkey, there must be an independent judiciary. That's the basis on which we will judge Turkey's process towards accession if we feel and see there is an independent judiciary.

There was an election for the Supreme Board of Judges and Prosecutors [HSYK] last Sunday, and after the elections even the EU Minister said that this result shows how the judicial system works in a democratic way. How do you evaluate his remark regarding the result in the election?

I only read about the issue in the press. Therefore, it would not be fair to make open remarks towards Turkey and the position of the European Parliament at this stage. I have heard various reports about this council's elections. I have also listened to the reply given by the minister. In the next interview after my first report, we will talk about this. I just want to be fair to both sides, and it is necessary to hear other people's opinions because I'm speaking on behalf of the European Parliament as the rapporteur. I'm planning to go to Turkey at the end of November, and these are the issues I want to discuss with my counterparts, with all actors that are important in a democratic regime, not just with the government.

What do you want to say about the new European strategy of Turkey?

We have to see the three pillars that the ministers are talking about. I understand that the last presentation will be done in November with a clear roadmap. I find it very positive that not just the EU minister but also President Erdoğan made his first statement by saying, "EU accession is very important." This is a positive sign because I believe in the last years there has been a very positive approach from both sides towards making progress there. I take this as a positive outreach to the European Union in which there is willingness by Ankara to work, to further align and to make progress in the chapters that we are negotiating on. This is also the basis of my cooperation with EU Chief Negotiator Volkan Bozkır.

The Kurdish Reconciliation Process, which is ongoing, is praised in the report. Would you like to say more about the current point of this issue?

As a rapporteur, I can say the internal process that is happening in Turkey is important. I also understand there are emotions about what is going on in the region. Of course, this could have an impact on internal dynamics in Turkey. But I would very much hope that the moderate line that has been taken by the last government over the last years can be continued. Because in the end, I believe this is in the interest of all, but first and foremost, for all citizens of Turkey, this reconciliation process should continue and a positive agreement signed by all sides.

Minority rights are also your concern. It has been said that some development has been seen regarding this issue. Do you agree on these opinions?

Since I'm a new parliamentarian, I could not follow it from a political view. I'm planning to meet with minority groups, to meet with women representation groups during my visit. There are several minority groups in Turkey, and to make an assessment on that except for the Kurdish settlement process, which was clearly highlighted in the report, at least it was not one of the points that raise concerns regarding the rule of law and fundamental rights.

Turkey has had a huge refugee influx since the start of the Syrian Civil War and attacks by the Islamic State of Iraq and Levant [ISIS]. Don't you think that as a country en route to EU accession, Turkey deserves more support and credit from the EU?

As for the ongoing humanitarian crisis in which Turkey has the heaviest burden of all the countries in the neighborhood, as you say, I believe the official figures of 1.6 Million of Syrian refugees and almost 200,000 refugees from Kobane, is definitely a heavy burden that the Turkish government has taken up. I'm also happy because Turkey is a clear part of the alliance that has been set up by the leadership of the UN against ISIS. Turkey is taking on board and opening up its borders for the humanitarian crisis happening out there. I think both Turkey and the EU share concerns about the threat of ISIS. We share that responsibility, and Turkey has a much greater share in that the humanitarian situation – the people who are fleeing their homes must be helped. I really hope that in terms of this foreign policy, we can further align the EU-Turkey stance and come closer together.

In recent days, Turkey's EU Ministry said that Turkey and the EU need each other more than ever at this stage. Do you agree with him on this?

Yes, I absolutely agree. I think that Commissioner Füle in his letter, which accompanied the progress report, said that we need each other. And I think although you have also seen a decline of this dynamism in EU countries and in Turkey over the last years, the accession process is and will continue to be the main pillar of our relationship. I think we must also look for positive alignment on other areas. Foreign policy is one of them – a greater alignment in intensive trade relations, economic relations and energy relations. We have seen what is happening on one of the other sides of Europe with Russia, and we have a clear determination to further diversify our energy resources. Turkey is a very important part of that too. Let there be no mistake, for me the accession process is the main pillar of our bilateral relations, but there are many more issues where we are strong partners and strong allies. We are joint NATO allies with almost all EU member states. Turkey is an important partner and always sees the Council of Europe and all these European institutions as an asset for its policies. And we need each other. The region is very volatile, the region actually on all sides of both Turkey and the EU. So I think we have the same interests.