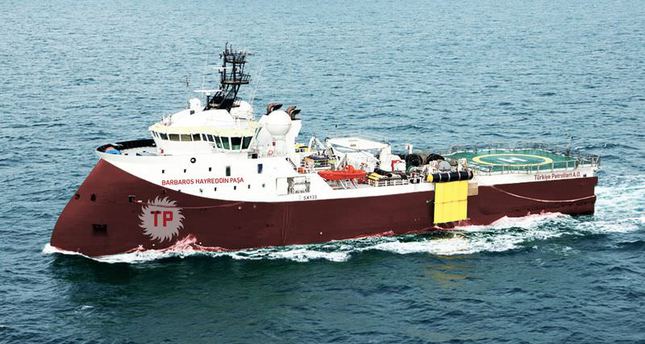 by Daily Sabah with Agencies Oct 20, 2014 12:00 am
Greek Cyprus on Monday accused Turkey of taking "provocative and illegal" action by sending a naval survey boat to an area where the Cypriot administration intends to conduct exploratory drilling for oil and gas.

Greek Cyprus' Defense Minister Chistoforos Fokaides said the vessel was being closely monitored and that Nicosia would examine "its response to defend its rights and sovereignty."

Nicosia is unhappy that Ankara is determined to search for oil and gas in the same region where Greek Cyprus plans to conduct exploratory drilling.
Turkish Cyprus President Derviş Eroğlu sent a letter to U.N. Secretary General Ban Ki-moon on Sunday, calling for the re-launch of negotiations with Greek Cyprus. The letter came after the Greek Cyprus administration suspended talks on Oct. 8 in retaliation for Turkey sending a warship to monitor an oil and gas exploration mission off the Cyprus coast.

"Negotiations are the only way to reach a solution," said Eroğlu, calling on the Greek Cypriot side to return to the negotiating table to reach "a fair, sustainable and negotiated solution."

Ankara and the Turkish Cypriot government have strongly opposed any unilateral move by the Greek Cypriot administration to explore any hydrocarbon resources around the island, saying that its natural resources should be exploited in a fair manner under a united Cyprus.

The island of Cyprus has remained divided into Greek and Turkish zones since a Greek and Cypriot coup was followed by a Turkish peace mission to aid Turkish Cypriots in the north in 1974.

The Greek Cyprus is a member of the EU and is internationally recognized except by Turkey, which remains the only country that recognizes Turkish Cyprus.