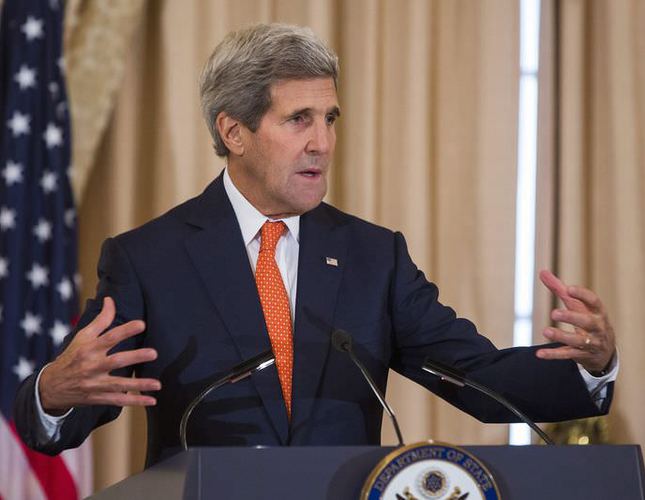 by Daily Sabah with Agencies Oct 20, 2014 12:00 am
U.S. Secretary of State John Kerry said Monday that it would be "irresponsible" and "morally very difficult" not to help Democratic Union Party (PYD) forces fending off the Islamic State of Iraq and al-Sham (ISIS) from the northern Syrian town of Kobani after the U.S. made its first arms drop to them.

"It would be irresponsible of us, as well as morally very difficult, to turn your back on a community fighting [ISIS]," Kerry said in the Indonesian capital Jakarta. He added that the U.S. understood its ally Turkey's concern over resupplying PYD forces, which are under the umbrella of the Kurdish Communities Union (KCK) and the PKK, which took up arms against Turkey to carve out an independent state in the southeast. U.S. President Barack Obama informed his Turkish counterpart, Recep Tayyip Erdoğan, of the U.S.'s intent to carry out the arms drop during a phone call Saturday night, according to officials. Overnight Sunday, the U.S. carried out air drops of small arms, ammunition and medical supplies to help Kurdish forces in the besieged town of Kobani. It was reported that the majority of supplies reached their intended targets and the officials were quoted saying that additional drops may occur in the upcoming days. Portraying the situation in Kobani as a "crisis moment," Kerry said the supplies were absolutely necessary.

"Let me say very respectfully to our allies the Turks that we understand fully the fundamentals of their opposition and ours to any kind of terrorist group and particularly obviously the challenges they face with respect [to] the PKK," Kerry said. Kerry added that the airdrops are intended to be temporary and Washington asked Ankara to allow Kurdish fighters from Iraq into Kobani to help. The aerial resupplying of PYD forces sparked controversy of whether the ammunition of an armed wing of the PKK could be described as a violation of the U.S. constitution as the People's Protection Units (YPG) are an arm of the PKK in Syria. The PKK is listed as a terrorist organization by the U.S. and the EU.

Just as the PKK, the officially-recognized Kurdistan Regional Government (KRG) is still on a black list of the U.S. KRG officials are in a tough position as well. A Turkish diplomat told Daily Sabah that the U.S. is still keeping the KRG's ruling Kurdistan Democratic Party (KDP) and coalition member Patriotic Union of Kurdistan (PUK) on a black list. Both KRG President Masoud Barzani's KDP and Jalal Talabani's PUK have been on the Tier 3 group of organizations since 2001 due to their alleged support for terrorism under the U.S. Patriot Act.