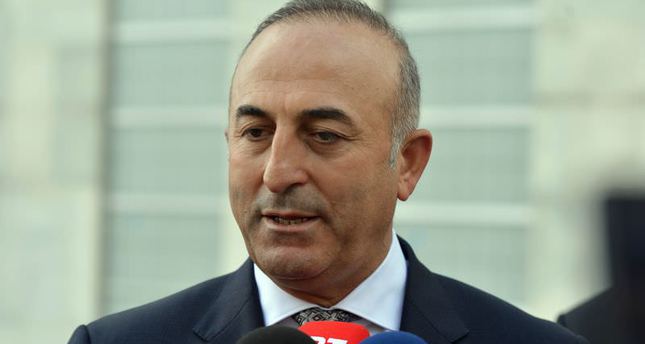 Turkey, proving it has no wish to see Kobani fall into ISIS hands, is allowing Kurdish perhmerga forces from Northern Iraq to cross into the town, said Çavuşoğlu

Foreign Minister Mevlüt Çavuşoğlu said on Monday that Turkey has been assisting Kurdish peshmerga forces by allowing them to cross into Kobani, and added that Ankara and the Kurdistan Regional Government (KRG) are cooperating and talks are ongoing regarding the issue. Speaking in a news conference held in Ankara following the Tunisian Foreign Minister Münci Hamdi's official visit, Çavuşoğlu reiterated, "We [Turkey] have no wish to see Kobani fall" to the Islamic State of Iraq and al-Sham (ISIS) fighters in the region. He said that Turkey is demonstrating great efforts to prevent Kobani from falling, including offering humanitarian aid and medical assistance. Government sources, speaking to Daily Sabah, stated that a corridor to help Kurdish peshmerga enter into Kobani was open last night, but they did not give further information over the mobilization and the route of the corridor.

Hours before Çavuşoğlu's statement, American military officials said that U.S. aircraft dropped weapons, ammunition and medical supplies to Democratic Union Party (PYD) fighters - an arm of the outlawed PKK in Syria - to help them in their fight against ISIS.

According to U.S. officials, U.S. President Barack Obama phoned Turkish President Recep Tayyip Erdoğan on Saturday night and informed him of the intent to launch the aerial resupply. The foreign minister said that Turkey is aware of the U.S. resupply of the PYD forces in Kobani. Regarding the issue, Çavuşoğlu was quoted as saying, "Turkey is in full cooperation with anti-ISIS coalition led by the U.S."

Yet, Çavuşoğlu added that Ankara saw the move in a wider context of all regional threats, as the president expressed on Sunday that the Syrian Kurdish PYD is no different from the outlawed PKK. Çavuşoğlu shed light on Ankara's stance towards the U.S. arming of PYD fighters by saying, "The PYD will not gain Turkey's support as long as it continues its aim of controlling a specific area in Syria just like ISIS."

Noting that the goal pursued by the PYD is completely different than the aim of the Free Syrian Army (FSA), which opposes the regime of Syrian President Bashar Assad, the foreign minister highlighted that it creates a threat for the future, particularly the democratic structure of Syria.
Çavuşoğlu further urged the PYD to change its policies in the region and abandon these goals. He echoed Ankara's statements that the Assad regime is behind the latest development in the region and said that the only forces combatting the Assad regime in Syria is the FSA.

The foreign minister said, "We [Turkey] agree with the U.S. and other allies that the FSA is the only group which should be supported, as it is battling both ISIS and the Assad regime." The outlawed PKK took up arms against Turkey in the 1980s with an aim to carve out a separate state in the southeastern region.

The PKK is listed as a terrorist organization by also the U.S. and EU. The PYD, which is an administration under the umbrella of the outlawed Kurdish Communities Union (KCK) with the PKK, has been combatting ISIS to stop its advance in Kobani for more than a month.

Underscoring that Turkey wants the region to be cleared of all threats, Çavuşoğlu said, "We consider the military and medical materials provided by the U.S. with airdrops to all forces defending Kobani under this scope. He said that seven other groups, apart from the PYD, is now defending the northern town of Kobani. "The PYD and seven to eight other groups established a joint military quarter. The Iraqi Kurdistan Regional Government [KRG] also announced that they are in cooperation to help Kobani," added the foreign minister.

Turkey is in close ties with the KRG and the autonomous region, and Ankara is a significant ally for each. Last week, KRG President Masoud Barzani said in a TV interview that when the Northern Iraqi town of Erbil was under ISIS threat in June, Turkey secretly played a role in arming peshmerga forces.

Touching on the nearly 200,000 Syrian Kurds fleeing Kobani since ISIS's capture of Kobani on Sept. 19, the foreign minister said that Turkey wishes to see Kobani people back in their town and living in peace.