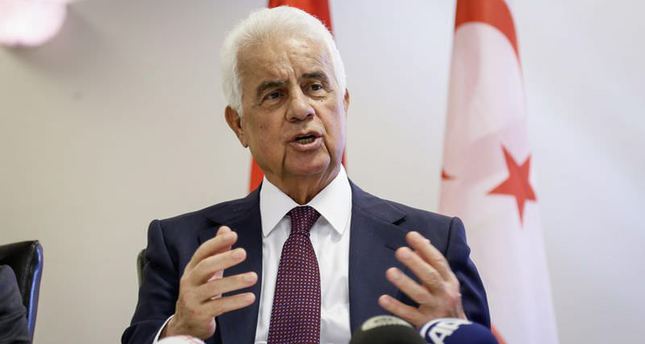 by Daily Sabah with AA Oct 20, 2014 12:00 am
Turkish Republic of Northern Cyprus President Derviş Eroğlu has sent a letter to U.N. Secretary-General Ban Ki-moon calling for the re-launch of negotiations with the Greek Cyprus administration. According to a statement issued by the president's office Saturday, Eroğlu called on the Greek Cyprus side to return to the negotiating table. The island has been divided since Turkey intervened to end the communal bloodshed in 1974 after a Greek-inspired coup. The letter comes after the Greek Cyprus administration suspended talks on Oct. 8 in retaliation for Turkey sending a warship to monitor an oil and gas exploration mission off the Cyprus coast. "Negotiations are the only way to reach a solution," said Eroğlu, calling on the Greek Cypriot side to return to the negotiating table to reach "a fair, sustainable and negotiated solution."

Turkey has denounced the Greek Cyprus administration's decision to back away from peace talks concerning the island with the Turkish Republic of Northern Cyprus.

In a written statement on Wednesday, Turkey's Foreign Ministry said the Greek Cypriot administration had been "insincere" about the peace talks. "It is well known that Turkey and Turkish Cypriots want political equality about the issue, which has been going on for [40] years, but efforts coming only from the Turkish side will not solve the stalemate," read the statement.

Greek Cypriot government spokesman Nicos Christodoulides told Daily Sabah lastweek that the Greek Cypriot administration was left with no choice but to suspend its participation in talks.

Christodoulides echoed Greek Cyprus President Nicos Anastasiadis' sentiments that when this issue is solved, the entire islander will benefit from this project and added that after a solution is found both sides can cooperate on energy field projects.

The negotiations between the two sides had resumed last February after a two-year pause. The previous round of talks collapsed because of the eurozone debt crisis and the Greek Cypriot side's turn to occupy the EU presidency in 2012.

The island of Cyprus has remained divided into Greek and Turkish zones since a Greek-Cypriot coup was followed by a Turkish peace mission to aid the Turkish Cypriots in the north in 1974.