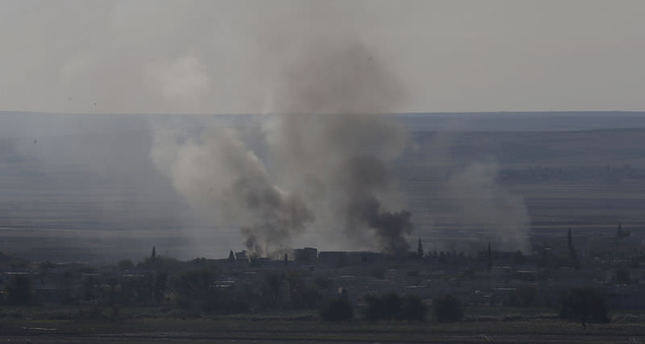 by Fatih Şemsettin Işık Oct 21, 2014 12:00 am
After Turkish Foreign Minister Mevlüt Çavuşoğlu said on Monday that Turkey has been assisting Kurdish peshmerga forces by allowing them to cross into Kobani through a corridor, debates of whether Turkey has changed its attitude toward Kobani became more audible. Despite claims in The Financial Times and Huffington Post on Tuesday that Turkey is cornered and constrained to take action, experts say Ankara has maintained its position except for extending a mandate authorizing the sending of troops into Syria and Iraq if needed by a year. Experts, rather, pointed out that it was the (Democratic Union Party) PYD that changed its policies regarding other Kurdish actors in the region.

Can Acun, an expert from the SETA Foundation said that Ankara's allowing a corridor from Iraq to Syria through Turkey for peshmerga fighters is within the context of the mandate passed by Parliament and would contribute to remove the perception that Turkey backs the Islamic State of Iraq and al-Sham (ISIS). "The PYD was making propaganda of Turkey's deliberate attitude as a clue of Turkey's so-called support of ISIS and preventing humanitarian aid from being sent to Kobani," he said and added, "This step should demolish this propaganda and the apprehension that came out of it."

As opposed to Turkey having the same attitude since the terrorist organization ISIS began its attacks the PYD has changed its policy in the fight against ISIS and cooperation with other Kurdish factions in the region.

The Kurdistan Regional Government (KRG) decided to send its peshmerga forces after a series of talks with the PYD at the beginning of October. The Kurdistan Democratic Party (KDP), the ruling party in the KRG, is the most powerful unit among Iraqi Kurds. The KDP is a conservative party while the PYD has socialist sentiments. There has been a rivalry for authority and tension between these two Kurdish political powers.

Oytun Orhan, an expert on the Middle East in ORSAM, an Ankara-based think tank, said this rivalry underscored that it is the PYD that changed its policy rather than Turkey. Orhan said, "Turkey already has a perspective in which it supports Kurdish parties and actors in Syria apart from the PYD. However, the PYD was trying to put hurdles on it. Having a look from [the] perspective [of the corridor], it is the PYD that made a shift in its policy more than Turkey."

He also underlined the concerns that Ankara has and that there might be a little shift in Turkey's policy. That being said, "Turkey has been aiding Kobani in humanitarian terms but it has been slightly reluctant to send military aid since the PYD is an offshoot of the PKK in Syria. Therefore, it is possible to say Turkey also made some changes in its policy."

Meanwhile, U.S. Secretary of State John Kerry on Monday pointed out that dropping weapons was a temporary measure and that the U.S. had asked Turkey to allow the passage of the Iraqi Kurdish fighters. "It would be irresponsible of us, as well as morally very difficult, to turn your back on a community fighting [ISIS] as hard as it is at this particular moment," said Kerry at a press meeting in Jakarta.

Soner Çağaptay, director of the Turkish Research Program at the Washington Institute for Near East Policy, said that the U.S. is content with Turkey's action of creating a corridor for peshmerga forces. "Washington supports the idea of the Iraqi Kurds fighting with the Syrian Kurds to defend Kobani. At the same time, the United States is alarmed that this process promoted by Turkey has been very slow in the making. This is an especially grave concern since ISIS is threatening to completely overrun Kobani," Çağaptay said.

While a military corridor for peshmerga forces is being prepared in the southeastern part of Turkey, the U.S. continues to hit ISIS targets and drop weapons, ammunition and medical supplies to PYD fighters to help them in their fight against ISIS. According to U.S. officials, U.S. President Barack Obama called Turkish President Recep Tayyip Erdoğan on Saturday night and informed him of the initiation to launch the aerial resupply.
The Kurdish city of Kobani has been under siege by ISIS for more than a month as People's Protection Units (YPG) try to push back the ISIS militants. The U.S. Air Force has also conducted more than 135 airstrikes against ISIS.