'States ought to respond to citizens' needs,' says president Erdoğan 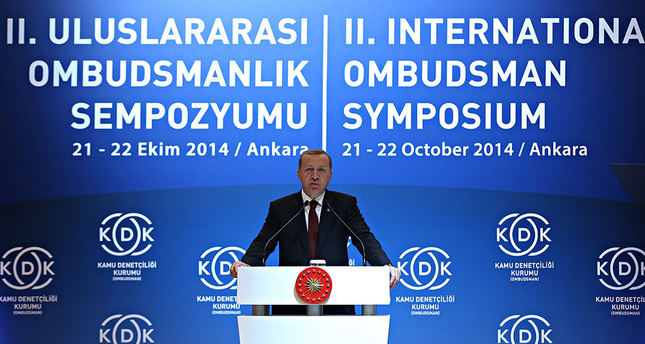 by Daily Sabah with AA Oct 21, 2014 12:00 am
President Recep Tayyip Erdoğan speaking at the International Ombudsman Symposium in Ankara on Tuesday has emphasized the importance of responding to citizens' needs and expressed that a state which sees its citizens' demands as a threat will eventually turn into an oppressive state.

Underlining the need for the system to prioritize the people rather than the state, Erdoğan expressed that states weaken as the gap between the citizens and the states widen. He stated that it is crucial for the Republic of Turkey to observe its past in order to ensure it is a long-lasting state. He alluded to the Ottoman Empire and noted one of the reasons why it has successfully ruled for six centuries was due to the fact that the Ottoman State was just to its citizens and responded to their needs. He explained that when the AK Party proposed to make reforms 12 years ago, some opposed it on the grounds that removing prohibitions on different languages would damage the state and divide Turkey. "The opposite happened" said Erdoğan, who expressed that the democratic reforms have politically and economically strengthened Turkey.

"There could be no freedom in a country where there is no security and vice versa" said the president, underlining the importance of preserving the multicultural fabric of the society. He expressed that Turkey's determination to surpass contemporary democratic standards through reforms will not retrograde.

Turkey will not bow to double standards and unfair criticism from the West while taking the same level of security precautions as them, said President Recep Tayyip Erdoğan.

Demonstrators took to the streets under the pretext that the Turkish government was allegedly doing nothing to halt the advance of militants of the self-proclaimed Islamic State of Iraq and Sham (ISIS) who were advancing on the Turkish-Syrian border town Kobani.

"We are currently adopting the same measures as Europe and the U.S. I personally know the way the security forces in the West take measures in the face of vandalism," he said.

"Would the West call such vandalism in their own country freedom? But a double standard is very clear when it comes to Turkey."

Scores of vehicles, state buildings, party offices and shops were set on fire and damaged during the violent protests.

"When Turkey takes any measures regarding social media, it immediately turns into an organized smear campaign both domestically and internationally," he said.

Erdogan also remembered three young people killed by pro-PKK supporters during the Kobani protests two weeks ago. Yasin Boru, 16, Hakan Gokgoz, 26, and Huseyin Dakak, 19, were killed by attackers armed with machetes and guns on the second day of Eid al-Adha. Their bodies were mutilated by the attackers afterwards.

Saying that Turkey takes most appropriate measures to provide security for its people, "which is a sine qua non of freedom and democracy," Erdoğan went on: "We will never let Turkey return to 90s, when harsh security measures came to the forefront."

"You won't raise your voice when some 300,000 people were killed in Syria, but you will set the country on fire when it comes to Kobani." said Erdoğan, who expressed that the government is accommodating a significant amount of people who have fled Kobani.