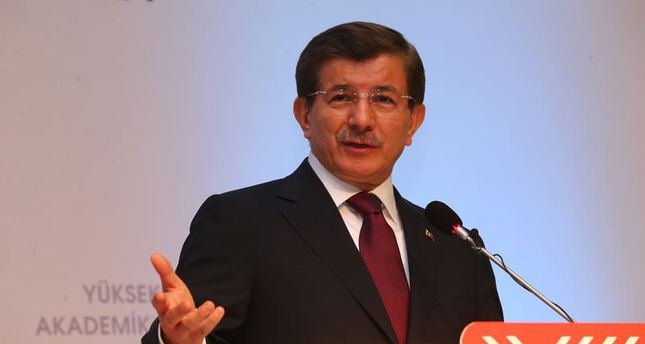 by Daily Sabah Oct 21, 2014 12:00 am
Turkish Prime Minister Ahmet Davutoğlu commented on the recent dispute between Greek and Turkish Cyprus on Tuesday in a press conference held at the Ministry of Energy.

"The resources in Cyprus are for all Cypriots, and Turkey will continue its seismic surveys in order to search for oil and gas in Cyprus's continental shelf, we have the right and we can use that right any time we want. Any step that excludes one side of the island, is not acceptable."

The dispute between two sides started when Greek Cyprus administration decided to suspend the peace talks with Turkish Cyprus after Turkey sent a ship to monitor an oil and gas exploration mission off the coast of Cyprus. Turkey and the Turkish Cypriot government have strongly opposed any unilateral move by the Greek Cypriot administration to explore hydrocarbon resources around the island, saying that its natural resources should be exploited in a fair manner under a united Cyprus.

Davutoğlu also informed reporters about the recent situation in Kobani and said the Peshmerga forces had not crossed from Turkey into Kobani yet and the issue was still being discussed.

"Forces associated with the PKK, referring to the PYD, can not cross into Kobani from Turkey, however the peshmerga forces officially recognized by Iraq's constitution will be able to," Davutoğlu added.

The Kurdish majority border town of Kobani, which is under the control of the People's Protection Units -- the armed wing of the Democratic Union Party (PYD) -- has been the scene of fierce battles between Kurdish groups and ISIS since mid-September. Turkey considers the PYD as an extension of the PKK, and supports the peshmerga in the region.