Erdoğan: Peshmerga in Kobani was Turkey’s proposal to US 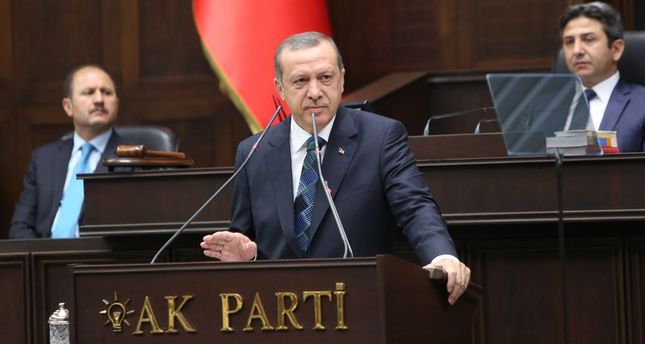 It was Turkey that proposed the sending of Iraqi Kurdish peshmerga forces into Kobani, said President Erdoğan, adding that the arms airdropped by the U.S. into Kobani being seized by ISIS was to be expected

Following Ankara's announcement that Turkey is allowing Iraqi Kurdish peshmerga forces to cross through Turkey into Kobani, Syria, where Islamic State of Iraq and al-Sham (ISIS) militants are battling Kurdish forces, President Recep Tayyip Erdoğan said yesterday that Ankara had already proposed to Washington the allowing of peshmerga forces to transit through Turkey to join the fight against ISIS. "I myself made that offer," Erdoğan said in a press conference before leaving for an official visit to Latvia. "And I already said 'that aid that you would deliver to the PYD [Democratic Union Party] and PKK is unacceptable for us.' " Turkey, the EU and the U.S. see the PKK as a terrorist organization. Turkey's offer to peshmerga forces came under criticism by some international media outlets as a reversal of policy that resulted in U.S. President Barack Obama's phone call to Erdoğan over the weekend. Answering the claims, sources and foreign experts said that it is not a shift from Ankara's policy on the ISIS threat considering the Oct. 2 mandate that allows Ankara to send troops to Iraq and Syria if necessary.

Erdoğan also said on Wednesday that it was wrong of the U.S. to air drop military supplies to Kurdish fighters defending Kobani, as some weapons were seized by the ISIS militants besieging it.

Foreign Minister Mevlüt Çavuşoğlu said on Monday that Turkey will allow Kurdish peshmerga forces to pass through Turkey to Kobani, highlighting that Ankara has no wish to see Kobani fall to ISIS. Some sources close to the government claimed that peshmerga movement into the north Syrian town had already begun the night before Çavuşoğlu's statement, but yesterday the foreign minister dismissed the allegations by saying Ankara has been working to coordinate peshmerga forces for their transit.

KRG Minister of Peshmerga Affairs Mustafa Seyid Kadir yesterday announced that 200 peshmerga soldiers equipped with heavy weapons will be sent to Kobani as the first step within days, according to a deputy in Parliament.

Shedding light on the route to be followed by peshmerga forces, the minister was quoted saying that the route will go through the southeastern towns of Silopi, Nusaybin and Suruç.

The details of the transit are becoming clearer by the day. According to government sources, the KRG, a regional ally for Turkey, will choose the forces that are scheduled to enter into Kobani by informing Ankara with a list of names. Pursuing the goal of securing arms and controlling forces to be sent to the region, Ankara is aiming to protect its sensitivity toward its position in the anti-ISIS coalition and plans to register the arms inventory to later repossess the weapons.

A road map to enable peshmerga forces to pass into Kobani is formulated to a large extent and 2,000 peshmerga soldiers are expected to be sent to Kobani, according to sources. If the talks continue with no delay or disaccord, a corridor for the passage of the peshmerga forces will be arranged within nine days. The arms to be used by peshmerga soldiers will be arranged and delivered by the U.S-led anti-ISIS coalition and Germany. A special committee from Ankara arrived in Irbil to coordinate the passages before it is finalized.

Sources cited that a peshmerga convoy will be deployed at the customs border of Kobani and the forces will be dispatched in accordance with the route to be selected after talks with the People's Protection Units (YPG) already battling ISIS in Kobani.

The YPG is an armed wing of the PYD, which is the Syrian affiliate of the PKK and peshmerga forces joining the defense of Kobani clouds the PYD's position in fighting ISIS. A senior official from the PYD, Enver Müslim, in remarks to BBC Turkish said on Oct. 20 that the entrance of peshmerga forces into Kobani is not a primary need at this time.

"What we need more than the peshmerga is arms […] If there is a need for support, the YPG will call them to come or ask them for arms assistance," Müslim said.

He suggested that peshmerga forces fight in their own territory and deliver arms to the YPG. Another government source evaluating the PYD's comments over peshmerga forces joining the fight said that there is rivalry among Kurdish groups over gaining leadership.

Suggesting not to put this rivalry only in the context of the crisis in Kobani, the source said that there is a big question of which Kurdish power group will play the crucial role in Iraq and Syria, and no matter what happens in Kobani, this dispute will continue.

Noting the significance of appearances, Ankara suggested peshmerga forces wear uniforms to prevent them from being associated with the PKK that took up arm against Turkey to create an independent state in southeastern Turkey. Ankara has stipulated that there are to be no Kurdish flag or arms during the passages.