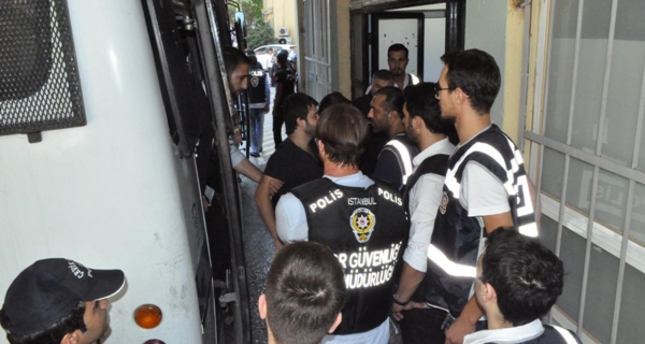 by Daily Sabah Oct 23, 2014 12:00 am
Following the completion of their interrogation, 12 police officers with alleged links to the Gülen Movement have been referred to an Ankara court while another five officers are still being questioned by Ankara police.

Early Tuesday the Ankara Police Department carried out operations as part of an investigation pertaining to the unlawful wiretapping of thousands of people including government officials and prominent figures by members of the Gülen Movement.

The detentions are part of an ongoing police operation in the capital and other Turkish provinces to investigate the alleged creation of an illegal organization as part of a plot against the government.

The Chief Prosecutor's Office ordered the detention of the 18 suspects – one is already jailed in an Istanbul prison – 14 of whom were located in Ankara and the remainder in İzmir, Siirt and Ağrı provinces. One of the suspects is said to have been a former police officer who served in the country's top spy agency, the National Intelligence Organization (MİT).

To date, hundreds of police officers have been detained and testified in court. Suspects are accused of eavesdropping on Turkey's top officials and of disclosing information of a highly sensitive nature as well as "forming an organization to commit crimes and being a member of this organization," "violating privacy," "illegally seizing personal information" and "forgery of official documents."

Ömer Altıparmak, former head of the police intelligence unit in Istanbul, was among the suspects. He surrendered to Ankara police to testify following the issue of a detention order. The Gülen Movement, led by Fethullah Gülen who lives in self-imposed exile in rural Pennsylvania, is accused of infiltrating Turkish state institutions through its members in an effort to take over the country by a coup. The movement is accused of wiretapping thousands of people including politicians, senior officials and prominent figures among others under trumped up terrorism related cases as well as false identities along with broadcasting fabricated tape recordings of government officials and their relatives as part of a defamation campaign when a dispute erupted between the government and the movement due to the closure of prep schools in Turkey, a source of income for the movement. Fethullah Gülen is currently facing charges of treason and the Turkish government might ask for his extradition from the U.S. if he is found guilty.