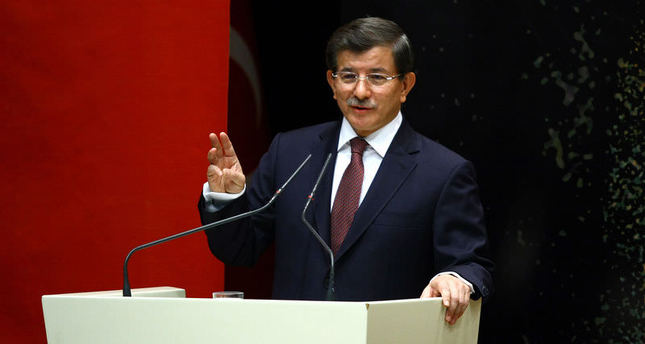 by daily sabah
Oct 23, 2014 12:00 am
Prime Minister Ahmet Davutoğlu, in a meeting held with Aegean provincial chairmen on Wednesday, criticized Washington's decision to assist the Democratic Union Party (PYD) instead of the Free Syrian Army (FSA) combatting both the Bashar Assad regime and the Islamic State of Iraq and al-Sham (ISIS), media outlets reported.

Stating that Turkey will never, under any circumstances, support the outlawed PKK or its arm in Syria, the PYD, Davutoğlu said that Ankara warned Washington over its choice to support the PYD instead of the FSA.

The FSA, which is the only opposition group in Syria recognized by the U.S., is frustrated with the U.S.'s failure to supply the group with weapons over the past three years despite continued killings by forces loyal to Assad while the pro-Kurdish PYD, which cooperated with the Syrian regime, is already receiving weapons delivered by U.S. jets.

One FSA commander described the U.S.'s conduct as "disgusting," noting that the PYD has been fighting ISIS for only a month.

The PYD is an administrative body in Syria under the umbrella of the Kurdish Communities Union (KCK), which is also an administration of the outlawed PKK that took up arms against the Turkish state in the 1980s with the goal of carving out a separate state in the southeastern region of Turkey. The PKK is listed as a terrorist organization by the U.S. and the EU.