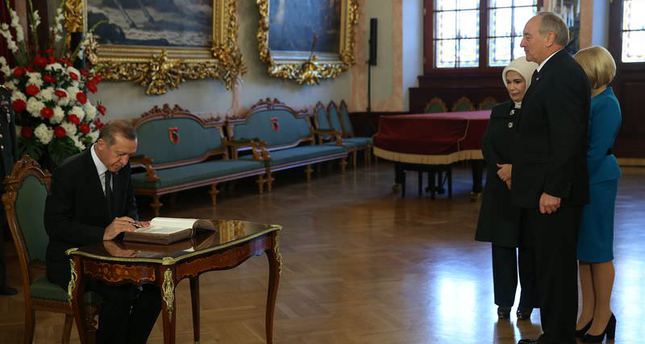 President Recep Tayyip Erdoğan as part of his visit to Latvia has met with President Andris Berzins and other officials as Turkey and Latvia signed numerous agreements to enhance bilateral relations between the two countries.

Thanking the Latvian President Andris Bērziņš for his hospitality, President Erdoğan has expressed that he has held meetings with his counterpart to determine how both countries can improve their cooperation and exchanged ideas about several issues. Erdoğan expressed he was pleased about Latvia's support for Turkey's EU Accession and stated that Turkey's membership in the EU would socially, economically, strategically and culturally contribute to the union.

In response to a question about Turkey's stance with regards to the Kobani issue, Erdoğan stated that he has previously noted that the transfer of arms to PYD was unacceptable as Turkey recognizes them to be a terrorist organization. He expressed that some of the weapons airdropped by the US to Kurdish fighters in Syria were seized by ISIS militants, and has proved unsuccessful. He reiterated on his previous sentiments and said he does not understand why Kobani is of such strategic importance to the US as there are no civilians left in the city. "There is a total of 130,000 Syrian refugees in Europe while 200,000 refugees from Kobani came to Turkey in a period of three weeks" said Erdoğan, who stated Turkey should be the one who should consider Kobani to be strategically important as the country is directly affected by the crisis in the city.

Touching upon Turkey's reconciliation process, Erdoğan expressed that the cooperation amongst the people of Turkey and the support of non-governmental organizations and political parties will strengthen the process and make it long-lasting.