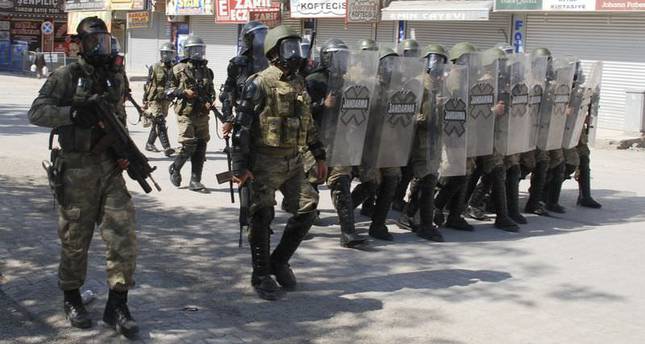 by Daily Sabah Oct 23, 2014 12:00 am
Turkey's gendarmerie forces, responsible for ensuring public order in remote areas outside of the jurisdiction of Turkish National Police, are preparing to demilitarize and adopt a new image through the domestic security reform package recently introduced by the government to gradually transfer the control of the gendarmerie from the Turkish Armed Forces (TSK) to the Interior Ministry.

Considered by many to be a revolutionary step to combat terrorism and end violence in Turkey, the demilitarization of the gendarmerie forces will mean that the institution will work as two separate forces completely integrated with the governorships of provinces. It is predicted that the gendarmerie forces responsible for domestic security will turn into professional local forces while the other unit will be responsible for ensuring security along the border and at customs gates.

Despite the fact that they are connected to the Interior Ministry on paper, gendarmerie forces have been administered by the TSK and are a law enforcement organization of a military nature. The reform package aims to gradually transfer the Gendarmerie Command into the Gendarmerie Directorate and appoint a governor or a senior bureaucrat as its director, giving it a civilian identity by eventually cutting its ties with the armed forces.

With command posts in 14 regions, 81 provinces and 920 districts, soldiers who serve in the gendarmerie forces are expected to be transferred to the Turkish Army and will be replaced by professionals from gendarmerie schools and police academies.

According to reports, the appointment of personnel will be administered by the ministry while senior appointments will be made by the Supreme Military Council (YAŞ). It is stated that the subordination of the gendarmerie to the Interior Ministry will mean that they will be inspected by civilians instead of by military authorities as the TSK's supervision of the institution will be halted. This in turn will imply that the gendarmerie will not be subject to memoranda issued by the TSK.

Along with serious internal reforms, the appearance of gendarmerie forces will also be demilitarized with new uniforms that are currently being designed by a prominent fashion designer. Over 183,000 gendarmerie officers will wear exclusive apparel instead of uniforms and it is reported that the garments will be navy blue instead of military green.

The domestic security reform package introduced by the Justice and Development Party (AK Party) government earlier this week aims to establish a balance between freedom and security of the people while enhancing the civilian identity of the state. The reforms came after a series of protests that took place throughout Turkey between pro and anti-PKK factions during Eid al-Adha, killing over 35 people and disrupting public order. Taking European models as an example, the reforms will be conducted in accordance with the EU Harmonization Committee according to Prime Minister Ahmet Davutoğlu.