PYD may change its mind about FSA troops, says Erdoğan 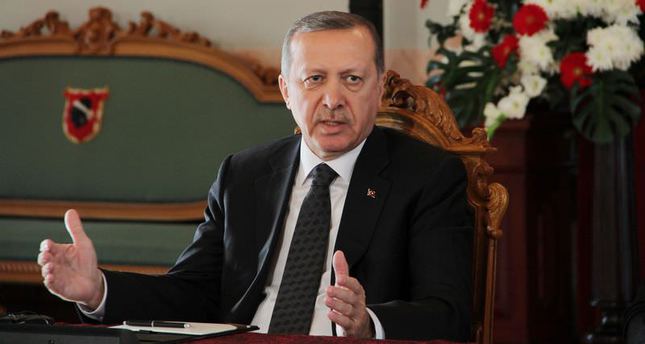 by Daily Sabah Oct 24, 2014 12:00 am
President Recep Tayyip Erdoğan on Friday has met with his Estonian counterpart Thomas Hendrik Ilves and attended a joint press meeting evaluating the current situation in the city of Tallinn. He expressed that the Syrian Kurdish fighters could potentially change their minds in the future about accepting 1,300 Free Syrian Army troops in Kobani to fight against the ISIS in Kobani.

Erdoğan said peshmerga forces, Kurdish fighters from Iraq, would be joining the fight to save Kobani, a Syrian town near the Turkish border.
"The PYD previously approved the passage of some 200 peshmerga forces," Erdoğan said. "However, we later learned that the number agreed has changed and now it is only 150 peshmerga soldiers."

"We meticulously said that our approach is very positive toward the FSA's fighting in Syria," Erdoğan said. "We always said that our first preference in Syria is the FSA, and the second preference is peshmerga."

"Now they seemed to have accepted some 1,300 troops from the FSA," he said.

The FSA, the main opposition armed group battling Syrian President Bashar al-Assad, will send troops to the town to aid in the fight against ISIS, according to a written statement by the group's operating unit in Aleppo.

The troops will be under the command of Colonel Abdul-Jabbar al-Aqidi. Details of the operations were not made public.

In the statement, the group called on international coalition forces and other armed groups in the region for assistance and cooperation in combating ISIS.

The battle for control of Kobani has been raging since mid-September when ISIS entered the town. An estimated 1.5 million Syrian refugees, including some 190,000 from Kobani, are being sheltered in camps across Turkey.

In addition, Erdoğan has commented on Turkey-Estonia relations and the Russian annexation of Crimea. "We have discussed international security and assessed the significance of better relations as NATO allies" said president Erdoğan, who expressed that Estonia is a long-standing ally of Turkey.

"Turkey does not recognize or intend to recognize the steps taken by Russia with regards to the annexation of Crimea" said Erdoğan, who expressed that Turkey is currently holding talks with Russia to discuss the matter.