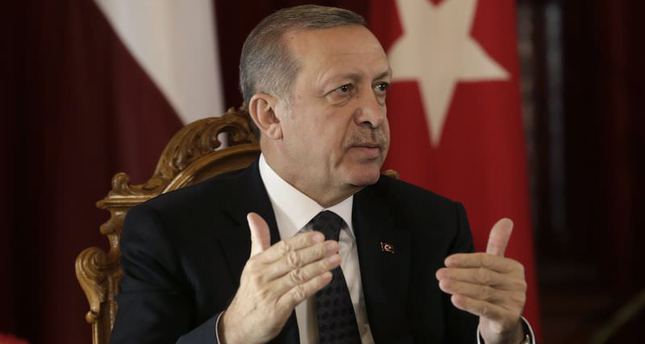 Criticizing the fact that some of the weapons airdropped in Kobani ended up in the hands of ISIS, President Erdoğan questions why the U.S. pays so much attention to the town to the detriment of the rest of Syria

The U.S. came under criticism by President Recep Tayyip Erdoğan after resupplying the Democratic Union Party's (PYD) armed People's Protection Units (YPG). At a news conference on Thursday during his visit to Latvia he said that the transfer of arms to the YPG was unacceptable because Turkey defines them as a terrorist organization. PYD is the Syrian wing of the terrorist PKK. On Sunday night the U.S. airdropped military supplies to YPG fighters defending the northern town of Kobani, Syria. It was reported that one bundle of weapons were seized by Islamic State of Iraq and al-Sham (ISIS) militants. "Where was the world when 300,000 people have been killed in Syria thus far? Why are they so keen on Kobani but not on the entirety of Syria?" Erdoğan asked and added, "These are the questions to ask."

Claiming that Kobani is not a strategic location for the U.S., but for Turkey, Erdoğan said that Turkey is accommodating all civilians fleeing the town and there are no civilians left.

He echoed his sentiments that some of the weapons from the U.S. airdrop ended up with ISIS militants even though they were intended to be delivered to YPG forces.

In response to Erdoğan's criticism, U.S. State Department spokeswoman Marie Harf said, "They are responding to repeated [ISIS] attacks upon their city and, you know we'll let the Turkish government speak for itself, but allowing [ISIS] to seize more territory along the border with Turkey could endanger more Syrian communities and threaten our shared interest with Turkey in defeating [ISIS] and strengthening the moderate opposition."

The details of the peshmerga's transit to Kobani are now being discussed between Irbil and Ankara, but Erdoğan announced Thursday that the PYD and KRG reached an agreement to send 200 Iraqi Kurdish peshmerga soldiers to the besieged Syrian town.

The Kurdish parliament in Iraq decided yesterday to send peshmerga forces to join in the fight to defend the besieged Kobani.

A Kurdish deputy on Wednesday said that the parliament was close to agreeing on sending 200 peshmerga soldiers equipped with heavy weapons to Kobani as the first step and should happen within days.

Shedding light on the route to be followed by the peshmerga forces, Minister of Peshmerga Affairs Mustafa Seyid Kadir was quoted saying that the route will go through the southeastern towns of Silopi, Nusaybin and Suruç.

"I made the offer to send peshmerga into northern Syria from Turkey," Erdoğan said and added that Turkey allowed peshmerga forces to enter Syria under the control of Turkish security forces.

According to government sources, the KRG will choose the forces that are scheduled to enter Kobani by informing Ankara with a list of names. Pursuing the goal of securing arms and controlling the forces to be sent to the region, Ankara is aiming to protect its sensitivity toward its position in the anti-ISIS coalition and plans to register the arms inventory to later repossess the weapons.

Ankara suggested peshmerga forces wear uniforms to prevent them from being associated with the PKK, which took up arms against Turkey to create an independent state in southeastern Turkey. Ankara has stipulated that there are to be no Kurdish flags or arms during the passage.

Erdoğan further criticized the PYD's reluctance to agree to have peshmerga forces fight with them against the ISIS threat in Kobani.

"At first, they did not accept peshmerga forces to come to help then they accepted. Afterward they did not like the number of troops, both sides agreed on the arrival of 200 peshmerga [soldiers]," Erdoğan said.

When Turkey first announced on Monday that it will allow peshmerga forces to pass through Turkey to Syria, the PYD Kobani Canton president, Enver Muslim, said in an interview on the same day that the PYD has enough young people to fight in Kobani and there is no need for peshmerga.

Experts have noted that there is still a power struggle between Kurdish groups over Kobani to gain dominance over one another. The PYD is the only Syrian Kurdish party that is not under the umbrella of the Kurdish National Coalition, which was formed through the efforts of KRG President Masoud Barzani.

The Barzani KRG administration and the Kurdish National Coalition have never accepted the unilateral formation of autonomous units by the PYD in northern Syria, demanding that authority should be shared between all Kurdish groups.

Having a regional alliance with the KRG, Turkey lists the PYD as a terrorist organization since it is under the umbrella of the Kurdish Communities Union (KCK), which is also the administrative body of the PKK.