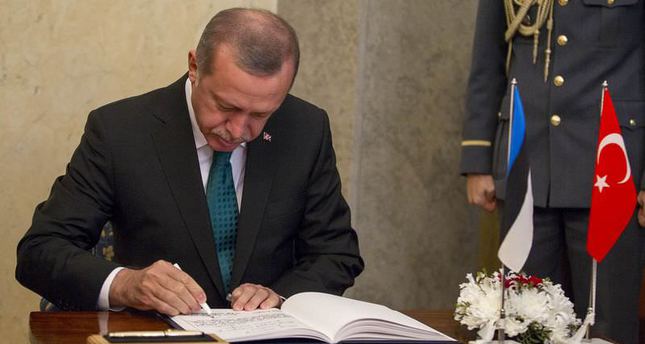 President Erdoğan announces that 1,300 Free Syrian Army members will join 150 peshmerga fighters in Kobani through corridors in Turkey while the PYD leadership balks at its loss of regional influence

President Recep Tayyip Erdoğan, speaking in the Estonian capital of Tallinn, said on Friday that Ankara will allow 1,300 Free Syrian Army (FSA) members through a corridor to defend Kobani, a few days after announcing that 150 Iraqi Kurdish peshmerga fighters would also be allowed through. However, Turkey's efforts to prevent the fall of the town to Islamic State of Iraq and al-Sham (ISIS) is opposed by the Democratic Union Party (PYD) Co-President Salih Muslim, who in a statement a few hours after Erdoğan, said FSA was actually fighting against PYD and accused Turkey of ulterior motives. The PYD, which is the Syrian faction of terrorist PKK, and its armed wing the People's Protection Units (YPG) are focused on utilizing the world's attention on Kobani into a military presence in the region. Muslim, speaking to pro-PKK Fırat news agency, said the Iraqi Kurdistan Regional Government (KRG) should send arms rather than peshmerga fighters.

"We have no problem with the passage of FSA in Kobani," said President Erdoğan, adding that Turkey had already offered the U.S. President Obama to send FSA to the besieged town of Kobani at first.

Expressing that the Syrian Kurdish fighters could potentially change their minds in the future about accepting 1,300 Free Syrian Army troops in Kobani to fight against the ISIS in Kobani, the president noted, "The PYD previously approved the passage of some 200 peshmerga forces," Erdoğan said. "However, we later learned that the number agreed has changed and now it is only 150 peshmerga soldiers."

Speking to Daily Sabah on Friday, columnist and Kurdish politics expert Kurtuluş Tayiz stated that Muslim's words were rather an opposition to other groups joining fight against the ISIS in Kobani. "Muslim is not refuting Erdoğan's words but objecting FSA reinforcement. He did the same when KRG leader Barzani offered to send 2,000 peshmergas to Kobani. Later this number was reduced to 150 and now they are negotiating to bring this number down to 120," Tayiz said.

When asked about Muslim's criticisms towards Turkey, Tayiz said Turkey had agreed to let Peshmerga pass through its soils to enter into Kobani to fight against ISIS, Turkey also told FSA to send reinforcement group to join the fight it has also agreed to open a corridor for peshmerga fighters to pass with their arms.

"What PYD cares about is not Kobani's fate but instead having full control of the area itself without other groups. If others help to save Kobani from ISIS, the PYD will not have much a say in the area and it will not achieve to create its tiny North Korea. The U.S. has to see this," Tayiz said, adding that Muslim demanding heavy weapons to fight ISIS is not "logical" as its fighters are not capable of using such arms.

According to Tayiz, PYD's stance had brought Kobani to brink of collapse to ISIS hands. "They are seeing Kobani as an opportunity to create an area in their control and continue their close relations with the Assad regime," he added.

The FSA, the main opposition armed group battling Syrian President Bashar al-Assad, will reportedly send troops to the town to aid in the fight against ISIS, according to a written statement by the group's operating unit in Aleppo. The troops will be under the command of Colonel Abdul-Jabbar al-Aqidi. Details of the operations were not made public. In the statement, the group called on international coalition forces and other armed groups in the region for assistance and cooperation in combating ISIS.

The battle for control of Kobani has been raging since mid-September when ISIS entered the town. An estimated 1.5 million Syrian refugees, including some 190,000 from Kobani, are being sheltered in camps across Turkey.

"We meticulously said that our approach is very positive toward the FSA's fighting in Syria," Erdoğan said. "We always said that our first preference in Syria is the FSA, and the second preference is peshmerga."

Regarding the passage of peshmerga forces into Kobani, the Turkish General Staff issued a statement on Friday. Even though no details have been released over how the peshmerga forces will travel across Turkey to join the Kobani fight, some media outlets reported that the General Staff proposed air transport for peshmergas and these allegations were denied by the Turkish General Staff. The stories said that peshmerga forces would be airlifted to Kobani through Turkey's southeastern province of Şanlıurfa or they would enter Turkey through Khabur border checkpoint on contry's southeastern border with Iraq. These and similar articles involving the movement Pershmerga forces from Turkey to Kobani were all untrue, the statement said.

KRG Minister of Peshmerga Affairs Mustafa Seyid Kadir on Tuesday announced that 200 peshmerga soldiers equipped with heavy weapons will be sent to Kobani as the first step within days. Shedding light on the route to be followed by peshmerga forces, the minister was quoted saying that the route will go through the southeastern towns of Silopi, Nusaybin and Suruç.

According to government sources, the KRG will choose the forces that are scheduled to enter Kobani by informing Ankara with a list of names. Pursuing the goal of securing arms and controlling the forces to be sent to the region, Ankara is aiming to protect its sensitivity toward its position in the anti-ISIS coalition and plans to register the arms inventory to later repossess the weapons.

Ankara suggested peshmerga forces wear uniforms to prevent them from being associated with the PKK, which took up arms against Turkey to create an independent state in southeastern Turkey. Ankara has stipulated that there are to be no Kurdish flags or arms during the passage.

SENA ALKAN CONTRIBUTED TO THIS REPORT