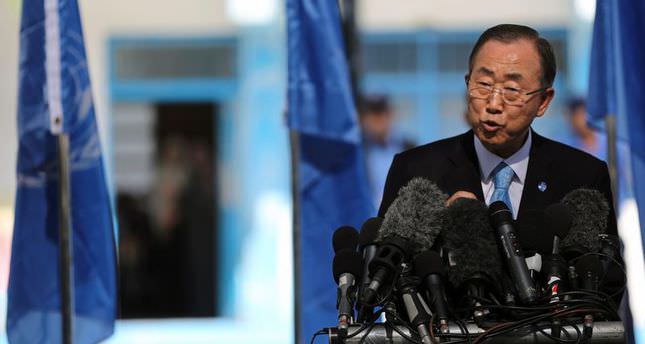 by AA Oct 24, 2014 12:00 am
The U.N. secretary-general has voiced concerns about escalating tension between Turkey and the Greek Cypriot administration over the issue of hydrocarbon sources off the island.

Ban Ki-moon met Thursday with his special adviser on Cyprus, Espen Barth Eide, and was briefed on the latest developments that led to the Greek Cypriot sector's unilateral suspension of peace talks over the divided island, according to a statement from his office.

"The secretary-general underscored the need for the parties in Cyprus to return to the negotiating table without delay," read the statement.

The Greek Cypriot side suspended talks Oct. 7 after Turkey sent a ship to monitor a Greek Cypriot oil and gas exploration mission off the coast of the island.

"The two communities can not afford to perpetuate the status quo, in particular in light of the deteriorating regional context," the U.N. chief stressed.

Turkish Cypriot President Dervis Eroglu sent a letter to Ban last week calling for the re-launch of negotiations with the Greek Cyprus administration to reach "a fair, sustainable and negotiated solution."

Negotiations between the two sides resumed last February after a two-year pause. The previous round of talks collapsed because of the Eurozone debt crisis and the Greek Cypriot side's turn to occupy the EU presidency in 2012.

Since 1974, the island has been divided into Greek and Turkish zones after a Greek-Cypriot coup was followed by a Turkish peace mission to aid the Turkish Cypriots in the north.