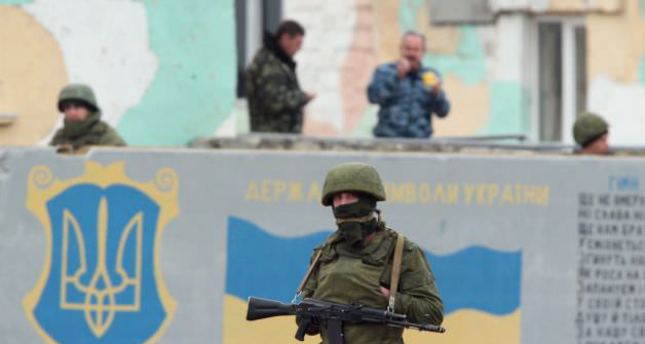 by Daily Sabah with Agencies Oct 25, 2014 12:00 am
Turkish President Recep Tayyip Erdoğan said that Turkey had continuously reiterated that it is not recognizing Russia's steps against Crimean Tatars.

Russian authorities have recently ordered Crimean Tatars to leave their assembly building in a move that the leader of the ethnic minority, which opposed Russia's annexing of Crimea from Ukraine, called a return to Soviet oppression.

Speaking at a press conference held during his visit to Estonia on Friday, Erdoğan said the Crimea issue should be solved through diplomatic talks and thanked the Estonian government for giving their support to Crimean Tatars.

Russian government bailiffs told the Tatars' governing body, the Mejlis, that its members had to vacate their building in Simferopol, the regional capital of Crimea. A charity headed by the largely Muslim community's spiritual leader and a newspaper published by the assembly have also been issued an eviction notice, they said.Authorities did not provide a clear explanation for the eviction order and Tatar activists said the move was politically motivated against an ethnic group that firmly opposed the Russian takeover of Crimea.

Mustafa Dzhemilev, the highly respected spiritual leader of Crimea's 300,000-strong Tatar community, said the Russian authorities wanted to shut down the assembly for good. "The Crimean Tatar Mejlis and all Crimean Tatars do not support [Russian] occupation," Dzhemilev said. "The Russian authorities have concluded that it's impossible to come to an agreement with Tatars. This is a full-scale return to the Soviet Union," said Dzhemilev, who is also a lawmaker in Ukraine's parliament and was banned by Russia from returning to the peninsula earlier this year. He said the minority's assembly would try to find a way to continue operating. "The Mejlis is the last hope of the Crimean Tatars."