There is no turning back from reconciliation process, says Turkish Deputy PM 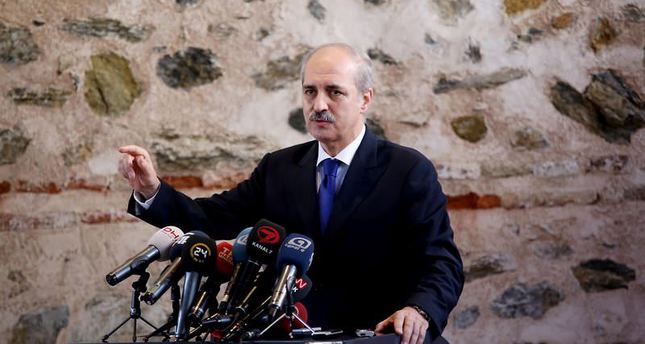 by Daily Sabah Oct 27, 2014 12:00 am
Deputy Prime Minister Numan Kurtulmuş has stated that there is no turning back from the reconciliation process that seeks to end the decades long rift between Turkey and the outlawed Kurdish Workers' Party (PKK), amid attempts to cripple the process.

Speaking at a meeting in Diyarbakır province , Kurtulmuş touched on the recent developments that continue both in and outside the country, and said that the attempts to draw Turkey into a 'meaningless' war will end in failure since the government will not let Turkey become involved in the ongoing turmoil in the Middle East.

"We will try our best to keep Turkey outside the chaos of the Middle East and we will be the address of unity, not division" Kurtulmuş was quoted as saying.

Turkey becomes the center of attention every time its neighboring countries face turmoil, due to its strategic location. The outbreak of civil war in 2011 in Syria, which was followed by the rise of the self-proclaimed Islamic State of Iraq and al-Sham (ISIS) threat in the region, has been increasingly shaping the country's foreign strategies. The chaotic atmosphere, which has extended to Turkey's eastern parts, has raised concerns over whether it will still be possible to maintain the continuity of the reconciliation process.

While the threat of ISIS lingers in Kobani—a Syrian town currently besieged by ISIS— the Kurdish fighters defending the city against their attacks have created another problem for Turkey. It is now feared that the weapon supplies being sent to the outlawed forces of Democratic Union Party (PYD) by coalition members, to save Kobani from ISIS, could possibly be used against the country at a later date.

Turkey's deeming of the forces of PYD defending Kobani as an offshoot of PKK was the reason for its lack of participation in the coalition of countries giving them military support.

The reluctance of the government to give support to what they have labeled as a 'terrorist organization', triggered protests, mainly in the southeast of Turkey, which claimed 39 lives. The Kurdish radicals, who demanded more support from the Turkish government, staged violent protests, which morphed into vandalism and escalated tension between the ruling party and the People's Democratic Party (HDP), known as the legal wing of the PKK. The government alleged that the HDP was responsible for the clashes in question since the party's leader called for the protests to pour onto the streets ultimately resulting in a flood of outrage .

Following such developments, the ruling party members have been making reassuring statements whenever possible, to clear doubts that the reconciliation process is under risk. The latest of these was delivered by Kurtulmuş.

"We will speak with the language of peace, justice and unity in this country, not with the language of war and chaos. There is no turning back from the reconciliation process. Taking the final steps, we will bring permanent peace to the country. The process is like crossing a wild river, 80 percent of which has been passed. There remains only a little further to go to the end, but it is the hardest stage. The cost to go back now is higher than that of going forward, and we have no intention to pay that cost." Kurtulmuş added.

Shedding light on the critical situation present in the Middle East, Kurtulmuş also added there are certain powers who aim for profit by creating chaos in the region, which he said he hoped that the people of the region would not allow.
"We neither will put Turkey at war nor will give up on the reconciliation process that might trigger fights within the country." Kurtulmuş said, concluding his speech.