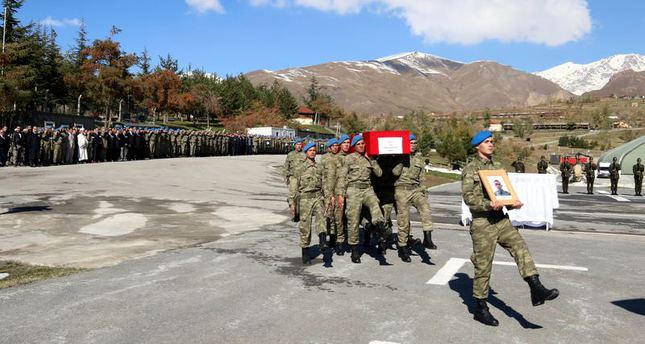 Suspects have been arrested in the Oct. 25 killing of three off-duty soldiers in the southeastern city of Hakkari, said a statement released by Hakkari Governor Yakup Canpolat, on Monday.

Canpolat announced that three of the five suspects detained as part of the investigation into the killings of the soldiers on Sunday were arrested Monday.

The investigation into the incident, in which eight suspects have been detained, is reportedly ongoing.

The perpetrators are believed to be members of the outlawed PKK's urban wing, the YDG-H, as reported by certain media outlets.

Three soldiers – one non-commissioned officer and two privates – were gunned down by the PKK on Saturday in the Yüksekova district of Hakkari.

The three gendarmerie soldiers, privates Yunus Yılmaz and Ramazan Köse and noncommissioned officer Ramazan Gülle, were serving in the 34th Border Brigade. The three, who were out shopping for supplies, were shot in the backs of their heads by two masked attackers at 4:00 p.m. All three were taken to the nearby Yüksekova State Hospital but succumbed to their wounds.

Yılmaz's father, Saim Yılmaz, said that he had served in the village guard against the PKK for a decade and that he had talked to his son the day before. He said, "I asked about his health. He told me he purchased a telephone for his mother and would be sending it our way. This heartbreak is shared by the whole nation."

Their families and loved ones broke into tears during the funeral of the three soldiers, which was attended by Development Minister Cevdet Yılmaz.

Memorial services were held for the three soldiers in Hakkari and the eastern city of Van. Top officials, including Defense Minister İsmet Yılmaz, attended the memorial services to pay final respect to the soldiers. Following the ceremony, the soldiers' coffins were sent to their hometowns.

There has been an upsurge in tensions in recent weeks between Ankara and Kurdish militants furious over the government's cautious policy on helping the mainly Kurdish Syrian town of Kobani, which has been besieged by militants of the Islamic State of Iraq and al-Sham (ISIS) for weeks.