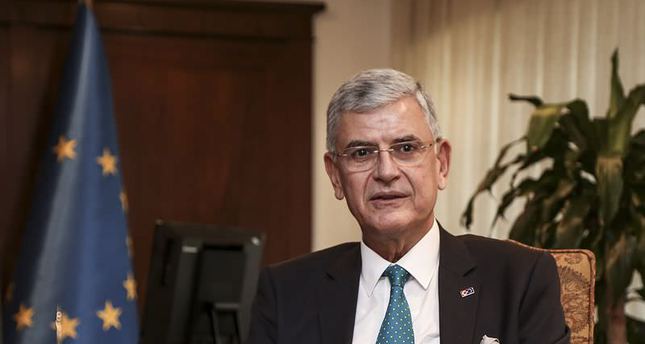 by AA Oct 28, 2014 12:00 am
European countries have a "misunderstanding" about the situation in the Syrian town of Kobani, Turkey's EU Minister and Chief Negotiator Volkan Bozkır said Tuesday.

Bozkır also urged other countries to stop accusing Turkey of not doing enough to deal with the dire situation in the town that is also known as Ayn al Arab.

Bozkır told the European Affairs Committee of the French National Assembly in Paris that the European countries had a "misunderstanding" about what's going on in Kobani. He explained there were no civilians in the town since they had all left to seek refuge in Turkey and now only the Kurdish fighters and the ISIS militants remained.

He said ISIS was a threat for the entire region and highlighted the fact that ISIS wanted to establish a "state" in Iraq and Syria.

He said that if European countries were willing to send their troops, Turkey would also do so. "But, of course, no one is willing to do so."

"Instead of just blaming us, we offer European countries to send experts to Turkey to train Kurdish fighters, and then send the fighters to fight the ISIS in Iraq or in Syria."

Kobani has witnessed fierce clashes between the ISIS militants and armed Kurdish groups since mid-September, as well as airstrikes by a U.S.-led coalition since early August.

Bozkır said Turkey had set a reform package to advance on its EU accession negotiations.

"Both side have made some mistakes and now it is time to talk to each other and listen to criticism," he said.

Turkey, which first applied to join the EU bloc in 1987, must comply with 35 "chapters." So far, 14 have been opened, while 17 remain blocked and a further four have yet to be discussed.

The minister said Turkey was expecting France to lift its block of Chapter 17, economic and monetary policy, as the country had fulfilled all its requirements.

The other three chapters are "agriculture and rural development," "institutions" and "financial and budgetary provisions."