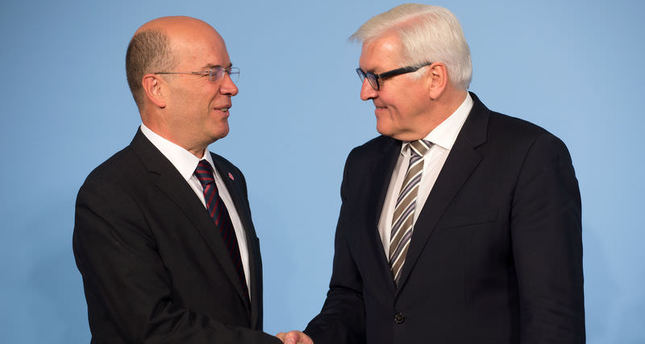 by AA Oct 28, 2014 12:00 am
Turkey has warned the international community that new humanitarian disasters in Syria could erupt through the increased brutality of the Assad regime and growing threat of the self-proclaimed Islamic State of Iraq and Sham (ISIS).

The comments by Turkish Deputy Foreign Minister Naci Koru came in Berlin on Tuesday at the "Conference on the Syrian Refugee Situation - Supporting Stability in the Region," attended by representatives of 28 countries and 12 international organizations.

Koru said: "We are faced with the risk of further humanitarian disasters and continued large-scale movements of Syrians towards our borders.

"The regime in Syria continues to oppress the legitimate demands of the people through increased brutality. I am afraid that the situation will get worse before it gets better."

Expressing concerns over growing extremism in Syria and Iraq, Koru said recent US-led airstrikes against ISIL in northern Syria alone would not be sufficient to deal with the threat.

He said: "We need a holistic approach, comprehensive and integrated strategy. The central elements of such a strategy in Syria should be the implementation of no fly zones and safe areas.

"Without these steps, it will not be possible to prevent large-scale refugee movements," Koru added.

An estimated 1.6 million Syrian refugees, including 200,000 who have recently fled from the border town of Kobani, are currently being sheltered in camps across neighboring Turkey, after a major attack by ISIS on the strategic town in September forced thousands of Kurds to seek shelter.

Koru dismissed criticism against Turkey over its alleged "inaction" in the ISIS-besieged town, assuring conference delegates that Turkey would continue an "open door" policy without any discrimination with regard to religious or ethnic origin.

"When ISIS began its attacks on Kobani, within a couple of weeks an additional 200,000 Syrians sought refuge in Turkey. This is more than the number of Syrians that all EU countries have taken since the eruption of the conflict," he stressed.

"The cost for Turkey has so far been over $4 billion. The contribution that we have received from the international community -- only $250 million -- has fallen significantly short of our expectations."

Koru stressed: "The neighboring countries including Turkey, have, to date, had to shoulder an unfair share of the humanitarian burden resulting from the conflict in Syria.

"In a spirit of partnership, we are in need equitable and meaningful burden-sharing by the international community."

Ministers from Syria's neighbors -- Jordan, Lebanon and Turkey -- are meeting at the conference with the permanent members of the UN Security Council; US, Russia, China, UK and France, and leading donor countries like Canada and Sweden.