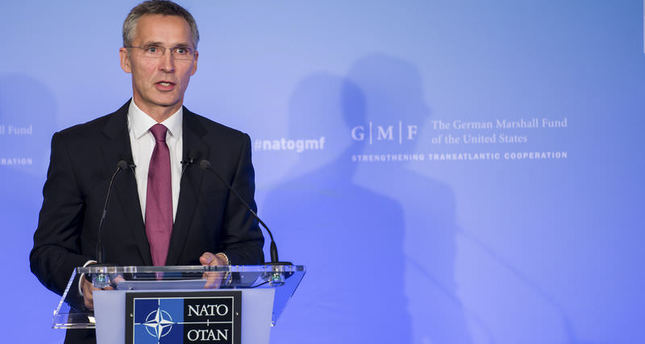 by AA Oct 28, 2014 12:00 am
NATO's Secretary General, Jens Stoltenberg, has commended Turkey for its efforts to help thousands of refugees fleeing from Syria and Iraq.

''Turkey is doing a lot because it is receiving hundreds of thousands of refugees; it's the country most affected by the crisis in both Iraq and Syria,'' Stoltenberg said during a speech in Brussels on Tuesday.

On September 18, the extremist self-proclaimed Islamic State of Iraq and Sham (ISIS) conducted a large-scale offensive in the mainly Kurdish populated town of Kobane in Syria.

The offensive resulted in more than 130,000 Syrian refugees crossing the border into southern Turkey between 19-22 September, raising the Syrian refugee population to around 2 million, according to officials.

Stoltenberg said NATO's main responsibility is to protect the borders of its allies, including Turkey, which has the second largest army in the Alliance.

''We have to work with others and try to develop more local strength; that's why we're focusıng on defense capability and training local forces,'' Stoltenberg said.

Turkey has already stressed the importance of training and equipping members of the opposition Free Syrian Army to fight against ISIS and to prevent the Syrian regime or the outlawed Kurdistan Workers' Party, also known as the PKK, from coming back.

Although US warplanes have been bombing the region where ISIS members are located near Kobane for weeks, Stoltenberg emphasized that it is not NATO as an alliance taking part in the US coalition.

Stoltenberg said Article 5 in NATO's founding treaty the pledge that all member countries must defend each other in the case of an armed attack is the basis of the Alliance.

He said the Readiness Action Plan, which was agreed on at the Wales Summit held between September 4 and 5, is the ''biggest reinforcement of our collective defense since the end of the Cold War.''

"It equips the Alliance to respond to all security challenges, wherever they may arise. We are making our forces more agile; and able to deploy quickly whenever threats emerge,'' Stoltenberg added.