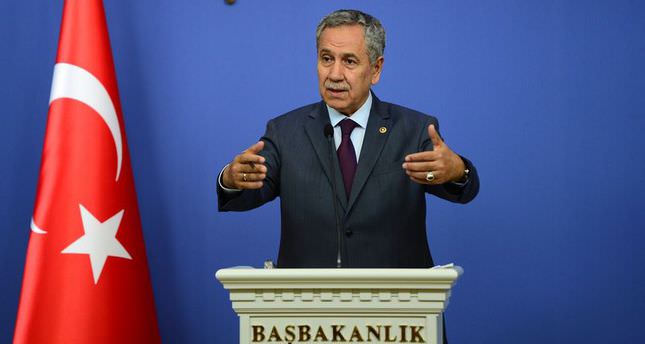 by AA Oct 28, 2014 12:00 am
The Turkish government has set up a center to facilitate the coordination response in case of emergencies, following the deadly pro-Kurdish violence which hit the country this past month, said deputy PM Bülent Arınç.

"The Prime Ministry Coordination Center will go into service upon the order of the prime minister and will cease operations when the development leading to the emergency ends," said Deputy Prime Minister Bülent Arınç following Monday night's Council of Ministers' meeting chaired by Ahmet Davutoğlu.

Arınç maintained that the coordination center would be effective as of Tuesday.

It will operate under the guise of the Interior Ministry in case of domestic incidents and under the Ministry of Foreign Affairs for events occurring abroad.

"In more complex situations, the center can cooperate with other ministries," he added.

The minister noted that the emergency coordination center would be chaired by the undersecretary of the prime minister or one of the deputy undersecretaries.

Three soldiers were shot dead on Saturday afternoon by two masked terrorists in the eastern Turkish province of Hakkari.

Arınç also made remarks over the seizure of a coal mine truck loaded with about 400 kilograms of explosives earlier on Monday by members from the outlawed PKK in the Silopi district of the southeastern Şırnak province.

He said the hijacking had been professionally planned, and reconnaissance aircrafts, attack helicopters and gendarmerie commando units were currently searching the area.

"The truck was detected as heading towards Mount Judi (a 2,089-meter peak north of Silopi)," he added.

On October 10, three Chinese workers were released in Şırnak after more than a month-long hostage by the outlawed PKK.

They were kidnapped from a thermal power plant on August 25 as they were going to shop near the Gorumlu municipality.